Giveaway delayed due to blogger fatigue and a pic of our new oven! Thriller, eh? 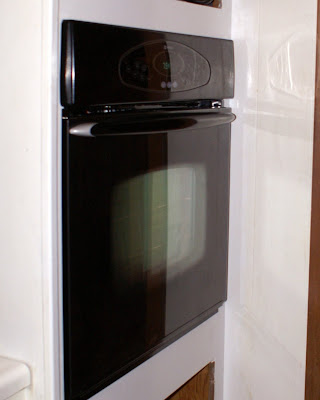 We had such an overwhelming week that I'm just worn flat. I've hardly read at all and I haven't gathered my next box of books to give away, although I'm working on it. Please be patient with me. I hope to get the next giveaway post up by tomorrow.
Our weekend:
1. Recovering kiddo sleeps much of Friday and then is driven by mom to physical therapy for his bad shoulder (he's been taking off swimming and is trying to rebuild his strength before returning).
2. New oven arrives (that's it above -- pretty, eh?) -- can't remember whether I shared with all of you that our oven door fell off just before Christmas. Not literally, just halfway. It was dangling and not repairable, as it was original to the house and had been falling apart for some time. I was actually unable to close the oven door, for a few months.
3. Saturday, the hubster and I attend a meeting for the "Marathon Makeover" group being formed in Vicksburg and join. We are now slowly cross-training and will soon begin running in preparation for training to run a marathon by the end of the year. We are tired of being couch potatoes.
4. Later on Saturday, hubby and son attempt to put in oven and realize the oven wiring in our house has been botched and has no protective box to prevent fire. Sheesh. Hubby rewires, inserts oven, bakes up a storm and discovers -- What, ho! A good oven is remarkably better than a 30-year-old oven that burns everything. Who'd have thought?
5. Saturday night, friend calls to tell me she's been in an automobile accident and is very, very sore. Also, her car has been totaled.
Mental note: Tell everyone I know that The point of brakes is to prevent or at least reduce impact. So, when you're about to hit someone? Yes, go ahead and use them. The kid who was driving told best bud, "I was going to hit you anyway, so I figured why bother with the brakes?" He shoved her car up a steep incline, about 300 yards.

6. Sunday, we oversleep but Kiddo drives to Sunday School without us. We drive to the Big City to shop for necessities and walk around bookstores. I purchase some totally unnecessary bookish items. I shall let you know about them in an upcoming "Blame it on Chris" post. Also buy some bubble bath for poor, sore, automobileless friend. Race home and write drawing post.

7. Monday, Kiddo returns to school while mother cleans house, goes for first walk of new exercise program, walks around outside with kitty cat, takes photos of birds and avoids many things she's supposed to accomplish. Kiddo discovers that the new semester began on Friday. He was too sick to attend on Friday anyway (and, apparently, half the school didn't show up) but now he has a monstrous pile of homework and he's still not fully recovered so he manages one page of Biology and falls asleep at 6pm. Argh. Argh, argh, argh.

8. Sit around twittering and order more of those hoopty dinosaur fizzies because they are so ridiculously fun. The last two were breech hatchlings.