We're In This Boat Together by Camille F. Bishop, Ph.D. 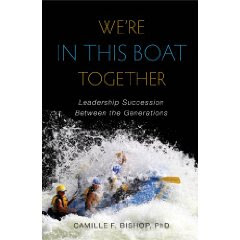 George, Brad, Brianna and Nate are connected by their jobs: the four of them make up the IT department at Handover Corporation. They also represent four distinct generations: The Silent Generation (1925-1942), Boomers (1943-1960), GenXers (1961-1981), and Millennials (1982-2002). They all have their own specialty, and when the day is done they go their separate ways--that is, until the company sends them on a white-water rafting trip to encourage team building. Surviving the rapids, they return to work to discover that their CEO is stepping down, sending the company into a tumultuous transition. They rely on the skills they just learned in order to survive and remain in the boat together.

This is a rather strange business book, but bear with me while I try to explain what I liked and disliked if you're interested in business books.

Instead of using real-life examples, the author created a fictional group of people to illustrate the different types of leadership one encounters across the four generations that are currently represented in the working world. "Business fiction" is how the cover blurb describes the book. Late in the book, when the author abruptly stops the story of Handover Corporation without truly giving it an ending, she says, "It would be easy to create a fairy-tale ending to this story. But in reality the future of this fictional company and its employees is yet to be determined." Wow, did I hate that. It was like jogging along and suddenly hitting a brick wall. Ouch.

Hang onto your hat, though. The story of those four characters is, in my opinion, uncomfortably simplistic and narrow-minded but the latter part of the book improves as the author delves into what can happen when the founder of a company plans well in advance and carefully chooses his successor. She gives several pertinent examples of successful changeovers in management. The final pages of the book are the best part, in my opinion, simply because at that point the author stopped sketching a set of characters that were far too crisply defined by their generations and began to get to the goal of the book: to explain how dangerous such shifts can be to a company and describe how one can avoid driving a company into the ground, basically hitting a place like the "Bus Stop" in the wrong way. The "Bus Stop"is a whirlpool in the white-water rapids where one can literally become stuck in place, going round and round with no chance for escape, and rafters must carefully circumnavigate the edges to successfully bypass the worst.

Problem: In reality I think there's a lot more blurring between the generations than the author allows for, so I found the reading of the fictional section made me bristle. When I was about a third of the way into the book, I told my husband I wasn't quite sure how to describe what it was that bothered me about We're In This Boat Together, apart from the fact that the lines between generations are too stiffly drawn to be realistic. The word "trite" came to mind.

Hubby read the cover blurb. "Books like this can be a little one-dimensional," he said. That's it! One-dimensional! See, the trouble is that the author says the cut-off point for Baby Boomers was 1960 and my husband and I are most definitely late Boomers, although we were born after 1960. None of the GenX descriptions fit either of us. We used punch cards in our computer classes in college and lean a little too heavily into the Luddite category to fit in with Generation X. Brad the Boomer was a little on the passive-agressive, belligerent side and that also bothered me. I guess it just rubbed me the wrong way, reading about a fictional character with whom I didn't want my generation associated. That and the fact that I thought that personality and leadership ability were confused. It seemed out of proportion that Brad was passed up for the opportunity to lead the group into transition because his shoulder locked up and he lost his paddle when he tried to show off. What, being middle-aged and having a bad shoulder means you'll be a wimpy leader? I don't buy that.

What would have made the book more palatable? My personal opinion is that the author could have done a much better job of illustrating her point by collaborating with someone who has worked in white-water rafting, telling true stories about rafting experiences and how people have shown leadership or the lack of it in times of crisis -- then applying those stories to the business world. Last year, my husband and I read High-Altitude Leadership and it was the real-life examples of the dangers of mountain-climbing and description of how principles of climbing sensibly can be used in business that really made the book rock. In fact, the husband went right out and ordered about 10 copies for his team, so I'm not just throwing this example out without reason. The book worked.

I've never been on a mountaineering trip and probably never will -- I've climbed a wimpy mountain in Colorado, but that's about it for me. Those guys who tackle the dangerous peaks are crazy. But, I've been white-water rafting and there were definitely some bracing moments; certainly, the expert in our raft had some wonderful stories to tell. She shared some before we began rafting and during the occasional lulls. I think there's some decent material in We're In This Boat Together. I simply think that it could have been much better if the author had taken the time to gather and analyze real-life situations in white-water rafting and apply them to her business model.

I'm iffy about recommending this one. Because We're In This Boat Together is a Wild Card tour book (although it doesn't appear to be remotely related to Christianity, apparently there are occasional true wild cards), I will post a chapter excerpt from this one, later in the month, and you can judge for yourself whether it appears to be worth reading on. I love that about Wild Card books. By the way, I absolutely adore that cover.

Would someone tell me what the heck happened to winter? Look what is happening in one of my planters: 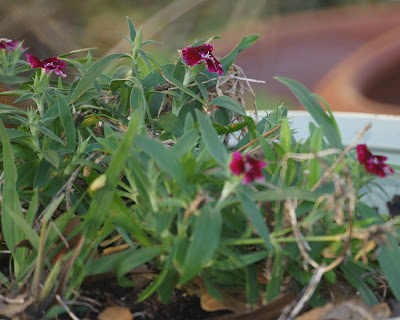 Next up will be a review of A Civil General by David Stinebeck & Scannel Gill, although I may declare tomorrow a "Get off your butt" day. I need to do that, now and then. Have a peachy day!