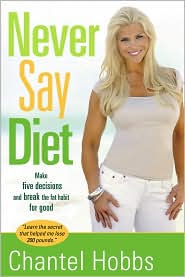 It's time to refuse the scam and let it be known that diets don't work! Temporarily, yes, but not for the long haul. A 2007 Stanford University study took 311 women, who averaged forty years old and 189 pounds, and put them on one of four diets: the low-carb Atkins and Zone diets, or the low-fat Ornish and LEARN diets. After six months the Atkins dieters had lost 13 pounds, the others 6 to 8 pounds. But then all the dieters started to regain what they had lost. After a year the Atkins dieters had regained 3 pounds, the othere 3 to 8. Why the rebound? Because none of the dieters was able to stick to the plan. And even if they had, they would have trimmed only a handful of pounds.

Don't depend on a diet program to change you. You are the only one who can make the necessary decisions and then follow through to change your life. You can become as fit, toned and healthy as you want to be. It isn't easy, but if you really want it, you will make it happen.

I'm having a bit of trouble formulating my thoughts about this particular book, so let's start with the basics: Never Say Diet is part memoir and part fitness/weight-loss advice. Author Chantel Hobbs was morbidly obese and loved to eat. She developed bad habits early and was overweight even as a youngster. Eventually, she reached the point that she realized the way she lived was likely to reduce the length of her life. She made the decision to overhaul her lifestyle and lost a significant amount of weight -- nearly 200 pounds. The author began simply by going to the gym, where she forced herself to exercise for 30 minutes each day. Gradually, she began to increase her workouts, study nutrition and alter her way of eating -- and even became a marathon runner.

What I loved about this book is that in many ways I agree with her philosophy. The best way to lose weight and keep it off is to change the way you think about food and exercise. Eat good foods, build muscle and take in fewer calories than you're burning and you will lose weight. She calls altering the way you think about food and exercise making a "brain change". I don't necessarily agree with how she went about her own weight loss -- particularly the fact that she started by doing workouts that could easily lead to injury because she didn't gradually ease into exercise, instead throwing herself into 30-minute recumbent bike rides at a [probably expensive] gym, leaving her with rubbery, sore legs and drenched in sweat. She could have easily ended up with an injury and shut herself down cold.

However, the thought process is great and it's my personal opinion that just about nobody can lose a significant amount of weight and keep it off unless they're ready and have the mindset that they want to lose weight for themselves. Dieting for other people isn't motivating enough.

The book is written from a Christian perspective as the author is a Christian. She considered God and the strength she gained from praying and leaving her life in God's hands a crucial part of the process. I don't think it's necessary to be a Christian to read the book and get something out of it, but there's plenty of God between the covers. Because I'm a Christian, I liked her thoughts about turning things over to God.

There were a few things I didn't like about the book, all essentially minor. One is that she is critical of all diet plans. I do believe there are other available programs that emphasize nutrition and lifestyle changes; it's a little harsh to throw all diet plans into one bucket and fish out the word "scam" to broadly describe absolutely every diet plan in existence.

The author does have a point that a lot of diet plans are expensive and they aren't necessarily educational. You can end up spending a tremendous amount of money to have meals provided and not learn a thing about how to eat right because someone is doing the thinking for you. But gym memberships generally are pretty costly, as well, and the author began by working out in a gym. It's a little two-faced to say, "Don't choose this expensive option, but -- hey, I chose another one that hits the wallet just as hard." She does, however, make some suggestions for other ways to get going. There are some photographs and exercises, all of which are performed with a large exercise ball and may include hand-weights or a medicine ball.

The author claims that the best way to initially handle a change in perspective about eating is to make food boring -- and then she advises against eating specific foods. Pickles, in particular, surprised me. They're extremely low in calories and I personally think they're a great snack alternative for those times when you're craving something salty with crunch. I also truly believe healthy food doesn't have to be bland or boring. Taste has to be relearned if you're accustomed to high-fat, salty or sugary foods but with the right spices good food can taste amazing. Fortunately, she does list some excellent "premium fuel" alternatives.

Finding balance is the important thing. I've tried hard to introduce family times that make physical activity fun and natural. My kids like to have swimming relays, hula-hoop contests, and their own cheerleading competitions in the living room. By making exercise such as walks, bike riding, hiking, skating, or shooting hoops a family fun time, you're changing up the movie-and-ice-cream afternoons and adding a health benefit.

Oh, yeah. That I agree with. I'm all about finding balance. We don't have movie-and-ice-cream afternoons, though, and never have. I kind of hate ice cream. You wanted to know that, right?

I got this book and the accompanying Never Say Diet Personal Fitness Trainer to read for a blog tour (you can read an excerpt of Never Say Diet, here). I'm not sure what I think of the Personal Fitness Trainer, in general. It's essentially a journal with blanks for specific information -- room to list everything you eat, records of how much you've exercised and to places to describe your feelings. There's a little rehashing of her story, some encouragement, scriptures and added advice. There are a couple of brief recipes for easy, healthful protein drinks to use as breakfast substitutes or snacks and other food recommendations. I guess my overall impression is that it's not a necessity but it could be helpful for those who need added guidance. I won't personally use it . . . at least not right away. That's because I'm involved in a very nicely structured exercise program, though, and I don't want to confuse the two.

If you choose to read the book and adopt the author's methods, I'd caution you to ease into exercise rather than following her example of throwing yourself into a vigorous routine right off the bat. I don't think she advises mimicking her early choices, but it's still worth mentioning. In general, I think Never Say Diet is a very good book that is easy to read and offers some good advice.

Coming up next: Reviews of Grace for the Afflicted by Matthew Stanford and Written in Blood by Sheila Lowe, as well as my next giveaway. I can't predict when I'll get to those posts, but I'm shooting for As Soon As Possible.

Just walked in: Voices Under Berlin by T.H.E. Hill and The Extraordinary Adventures of Alfred Kropp by Rick Yancey. Plus, a half-dozen pairs of double-layer running socks for my husband. I was so relieved when I discovered the postman didn't merely come to my door because I was weighing down his truck with books (again). He likes to rib me about that.

Cat and I sat on the porch and read, again, today. Our high was somewhere around 70. Lest you turn green with envy, be aware that any time it gets into the 60's in Mississippi we end up swatting away mosquitoes. Still . . . it was darn near perfect. I wish those of you who are dealing with icy weather a very safe week!