A Civil General by David Stinebeck and Scannell Gill 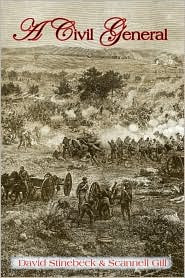 People in the South are polite only up to a point; if you threaten what they hold most dear, the system that enables them to live well, you have done something worse than murder. It is an act of disloyalty that is beyond indecency.

I ordered bayonets fixed; the enemy did the same. We were only twenty paces apart. Every one of my men knew that this was their moment of judgment. You could hear loud prayers and exclamations, goodbyes to wives and children back home, curses toward enemy soldiers uttering the same goodbyes and exclamations. We threw stones at them, and they at us. They were us. We were back in the school playgrounds fighting in the dirt over some meaningless insult. We were angry, very angry, but we also knew that there was something unacceptable about this fight, something deeply unfair.

is the story of George Henry Thomas. "Once considered the most successful general in the Civil War . . . he has been nearly forgotten by historians," according to the cover blurb. The story is narrated by a young Colonel named Swain, who becomes the general's confidante. Swain describes Thomas as a strong leader to his Northern charges in the Army of the Cumberland (and beyond, as his men eventually march to the sea with Sherman and he must turn back toward Tennessee with a much smaller group of men), a Southerner --schooled at West Point -- whose family disowned him when he chose to fight for the North, a devoted husband, and a slightly melancholy but determined man who commanded respect.

I found parts of A Civil General absolutely enthralling, especially some of the battle scenes. There were times during those intense action scenes that I got that sensation most bibliophiles live for: the I was there feeling. There were also stretches during which I felt drawn away from the action by the details. Sometimes there was too much description about movement of troops and military strategy for my taste. I think Civil War buffs who really know and understand the meaning of what the authors described would probably find those sections more comprehensible and interesting than I did.

Character-wise, I was glad the authors didn't simply zone in and narrow their narrator to a caricature who thought about nothing but the general he worked for. He was very human and focused not only his deep admiration of General Thomas (although, yes, sometimes he definitely did go overboard on his praise) but also on describing his personal experiences with a believable depth of emotion, occasionally longing for home and the woman he hoped to marry, often despairing at the insanity of war.

I was a little surprised by the descriptions of Ulysses S. Grant. I've read about his drunkenness and inability to find a successful profession before the war; but, in A Civil General he's described as clearly biased against Thomas in spite of Thomas' successes. Interesting. Again, I'm not informed enough to know how accurate that description may be, but I will say that the authors note their gratitude to two Civil War captains (one with the last name Stinebeck, obviously a relative/ancestor of one of the authors) for their wartime recollections. My impression, as I was reading, was that they had a better understanding of what it was like to be a involved in that war -- it's causes, life as a soldier and the poor judgments that drew it out -- than most.

The story goes beyond the Civil War, describing the death of Thomas and his funeral, which brought tears to my eyes. While I struggled a little bit during descriptions of military movement, the book is so heavy on the senses and left me with such a terrific impression of having been placed within some of the scenes that my feeling as I closed the book was something akin to, "Wow." It was definitely the kind of book that makes you want to read further about the subject matter and the real-life characters.

Recommended, particularly to those who know their Civil War history. For those who are on the ignorant side, I still think it's worth reading but some might find that you'll zone out a bit when they talk military movement. That obviously didn't bother me enough to set the book aside. I'd just shake myself a little and move on. Overall, I think the book is excellent.

Up next will be the answer to who wins The Box of Oh How I Love You. Thanks to all who have entered my drawing! We've had a rollicking fine time reading the answers to my son's silly question.

Anybody see that gorgeous full moon, last night? If not, here you go: 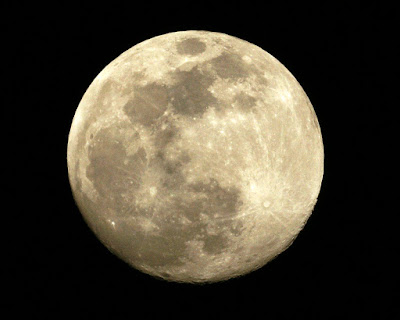 This is one of those things that make me want to blurt out, "Yeah! Go, God!" Blog at you later!