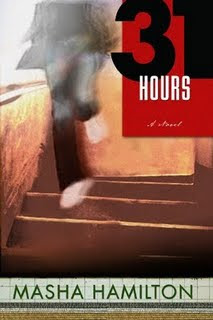 I found 31 Hours gripping enough that I didn't stop to mark any quotes, so here's the quote from the book cover:

It occurred to her that she needed to pray. Yet she had no idea how to do it . . . If she wanted to pray, she realized, she would have to make it up.

This was obviously Unbridled Books Weekend at the House of Bookfool. 2 in a row. 31 Hours is a real grabber. Jonas has not contacted his mother for 9 days and his best friend (possibly girlfriend) has been too busy with dance rehearsals to call him. Jonas' mother has a bad feeling and begins calling around to try to locate him. Nobody knows what's become of Jonas.

Meanwhile, Jonas is staying in a safe house, preparing for an act of unspeakable violence. Isolated from friends and family, unable to make outside calls or leave without being followed, he prays, cleanses himself and reflects on how he arrived at his decision. Will his loved ones be able to find him in time to prevent tragedy?

31 Hours grabbed me from the first page and held on tight. Jonas is a confused young man who has been searching for meaning. He has found it in the Muslim faith, but his friend and mentor is a terrorist who plans to use Jonas and others to avenge his brother's death. Interspersed between the scenes where Jonas reflects, prays and readies himself to die as a martyr we meet his mother, his maybe-girlfriend and long-time best friend, Vic, her sister Mara and a homeless man who makes his living begging in the New York subway system. Each character is beautifully rendered, realistically human with flaws and hopes and personal tragedies. One can't help but feel touched and horrified at the thought of how a terrorist act effects a broad range of people -- including a terrorist's family members -- and caught up in the hope that somehow Jonas will be stopped.

I can't tell you how the book ends because it's a spoiler. In fact, I didn't like the ending and then I thought about it and decided it was right, then I reconsidered, then I thought it had to be that way, then I waffled some more. This seems to be my month for not appreciating how authors choose to end their books. In general, I thought the author could have taken us just a bit farther. It's pretty clear what's going to happen and yet . . . maybe not. There are several possibilities, none of them likely. I just would have liked a little more rounding out; the conclusion was too abrupt for my taste. My only other concern was that it seemed like a few too many people had premonitions of what was to come, although I think there are honestly plenty of people in touch with that 6th sense.

4/5 - A very good book about the various lives touched by terrorism, well-written (although not perfect, in my humble opinion) and gripping. Excellent characterization, realistic situation but an ending I considered too abrupt. In spite of the ending, I highly recommend 31 Hours.

My do-list is kind of scary. How is yours? I planned to chatter a bit, at the end of this post, but I'm feeling a wee bit zombified so I'll save that for another day. Tomorrow, kiddo is getting an injection of cortisone in his bad shoulder. Yeeeeow! We're praying it helps. He's been in pain for about 2 years, now. I'll be on ice-bag refilling duty.

Bookfool in air conditioning with bare feet (and truly envious of Colorado residents, at the moment)
Posted by Bookfool at 10:00 PM