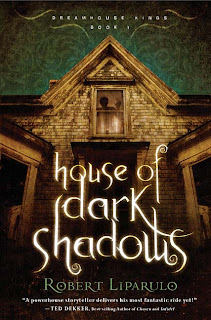 Looking for something creepy that won't keep you up at night? I've found the book for you: House of Dark Shadows. Be prepared, though because it's just the first book in a series. If you like this installment of the Dreamhouse Kings books, you'll definitely want to read on.

When 15-year-old Xander's family moves away from his lifelong home to a remote town in Northern California, he's frustrated. He has a close-knit family that he loves, but he was content with his life and happy in Pasadena. Leaving his friends and his girlfriend is awful; it seems likely they'll lose touch with 200 miles between them. When the family finds a huge house near Pinedale that has been unoccupied for several decades, Xander has a strange feeling.

Inside the house, it's impossible to tell the location of a sound if someone calls out. And, there are other creepy things that make him hesitant, like giant footprints in the dust of the dining room and the sensation that he's being watched. But, his parents are adamant. They love the house. In short order they clear the house of 30 years of grime and move in.

When Xander and his younger brother David discover that stepping into a closet takes them on a journey across town, they're a little shocked. But, it's the series of doors upstairs that act as portals through time and space that really intrigue them. What they don't realize is that there are dangers lurking behind those doors. What dark secret brought the King family to the house? Will they survive the house and its dangers?

Brittanie reviewed House of Dark Shadows and I immediately put it on my wish list. Wow, am I glad I trust Brittanie! This book was absolutely perfect for the RIP IV. It's suitably creepy and heart-pounding but lacks significant gore (although there are some violent scenes and there's a little gory description, it's nothing this chick couldn't handle) and it's not so frightening that you can't read it at night. I've already got the second book in the Dreamhouse Kings series, Watcher in the Woods, and I'm going to try to bump that one up to read as soon as humanly possible.

5/5 - A quick, adventurous young adult read -- creepy and surprisingly believable in spite of travel through time and space. While the book is the beginning of the series and there's a bit of set-up, House of Dark Shadows never ceased to hold my attention. I whipped through it pretty quickly and hated putting it down when I had to do the usual Mom things.

Kiddo has fried his computer and needs to use mine to work on an English paper, so I hope to be back later tonight to write a second review. But . . . not now. Hope everyone's having a fabulous weekend!
Posted by Bookfool at 5:37 PM