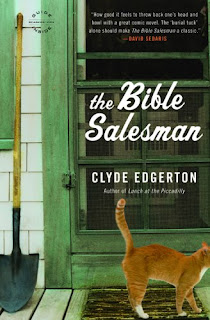 Ask me what it is about The Bible Salesman's cover that appeals to me. Go ahead. Ask.

Okay, since you asked . . . just about everything. The marmalade cat (we still miss our dearly departed little Miss Sunshine), the green door (I Love Green!!!!), the shovel. All combine to give the cover a welcoming "Home Sweet Home" look. At the same time, you can visualize yourself as the person who is about to knock on that door, can't you?

I just had to mention the cover because I appreciate an inviting book cover.

I've signed up to give away *5 copies* of The Bible Salesman by Clyde Edgerton and am eagerly awaiting my own copy for review, thanks to Valerie and the Hatchette Book Group.

Preston Clearwater has been a criminal since stealing two chain saws and 1,600 pairs of aviator sunglasses from the army during WWII. Back on the road in postwar North Carolina, now a member of a car-theft ring, he picks up hitchhiking Henry Dampier, an innocent twenty-year-old Bible salesman. Clearwater immediately recognizes Henry as smart but gullible, just the kind of associate he needs -- one who will believe Clearwater is working undercover for the F.B.I.; one who will drive the cars Clearwater steals as Clearwater drives along in his own car at a safe distance. Henry joyfully sees a chance to lead a dual life as a Bible salesman and a G-man.

During his hilarious and scary adventures, Henry grapples with doubts about the Bible's accuracy and we learn of his fundamentalist upbringing, an upbringing that hasn't prepared him for his new life. As he falls in love with the captivating Marleen Green and questions his religious training, Henry begins to see he's being used -- that he is on his own in a way he never imagined.

Questions and Topics for Discussion:

1. Henry sells free Bibles he receives from Bible societies across the country, which he has requested under less-than-honest pretenses. Discuss how Henry reconciles his actions with his morality. Does he feel that his actions are acceptable? Do you?

2. From the moment Henry and Preston meet, Henry's innocence contrasts with the older man's manipulativeness. Discuss the relationship between these two men. How does Henry's naivete ultimately allow him to upset Preston's plans for him? In what ways are the two men similar?

3. Henry's family is charitable (sending blankets to Yancy) but their church is sometimes harsh (warning the child Henry about being a blasphemer). How does Henry's Uncle Jack help him navigate these contradictions?

4. How do the elderly, especially women, contribute to the comic scenes in The Bible Salesman? Does their unworldliness add to their being funny? Are they similar to Henry in this respect?

5. The Biblical characters of Abraham, his wife Sarah, and his mistress Hagar intrigue and puzzle Henry. Does his knowing their story make it easier for him to accept his attraction to Marleen Green?

7. Although he initially views Henry as a gullible boy, Preston eventually realizes that he is not as clueless as he thought. How do you see Henry? Did your opinion change as you read? Why and in what ways?

8. Henry's beloved Uncle Jack is ejected from a surfside club as "white trash". Clearwater feels justified in burglarizing a plantation house owned by rich northerners in Florida. Does class conflict lead to the doctor's death in Drain, Georgia? Or is Clearwater's character the sole culprit?

9. In what ways does Henry mature from a child to an adult over the course of the novel? How is he still like a boy? What characters and events influence his growth? Do you think it is possible to maintain a positive outlook such as his in the face of the trials of adulthood?

10. Henry and Preston's journey through the South is the focus of the novel, but they travel in other ways as well. How does movement, in both the physical and psychological sense, cause the characters to change? Do you think Henry would be the same man at the end of the novel had he not partnered with Preston?

11. Family reunions play a big part in Henry's past. How does the extended family unify the disparate personalities and bloodlines in The Bible Salesman? Does it assuage the fact that Henry's parents are absent and that his sister's son looks nothing like his brother-in-law?

12. Did The Bible Salesman inspire you to compare parts of the Hebrew Bible to the King James Version and the Chicago Bible? If so, what differences in the interpretations of the text did you find interesting?

1. Leave your email address OR ELSE (Big Meanie Alert). No email, no entry.

2. Answer this question: Does the fact that Christianity, beliefs and Bibles play an important part in this book put you off at all or pique your interest?

3. Think like a North American and Be One. Hatchette's giveaways are limited to residents of the U.S. and Canada. No P.O. Boxes.

4. Spread the word and provide a link to your post or tweet for an extra entry. It is not necessary to comment more than once; you can put all the info in a single comment (actually, I prefer it that way). There will be five winners. Wahoo!

Also, don't forget to drop by and sign up for my other two giveaways:

The Smart One and the Pretty One - ends tomorrow night, Sept. 27 at 6pm!

Important Notice: I now give winners roughly 48 - 72 hours to respond because I'm a busy girl. I strongly advise following this blog in a reader, if you don't, so that you will see your name if something hinky happens to your email (or you just don't check your email often). I'll let you know how long you have to respond within the text of the drawing winners announcement post.
Posted by Bookfool at 6:33 PM

Email ThisBlogThis!Share to TwitterShare to FacebookShare to Pinterest
Labels: Drawing

New comments are not allowed.