Bundle of Trouble by Diana Orgain 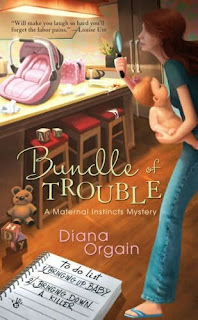 Kate Connolly has her hands full, first preparing for a new baby's arrival and then learning to adjust after her daughter's birth. When the police call to say they think a body pulled from the San Francisco Bay might be her brother-in-law, George, she's concerned. And, when she finds out the victim may have ties to her family, she decides to investigate.

And, the bit where Bookfool expresses a keen desire to bash Blogger:

Okay . . . so . . . I started this review yesterday and I was having trouble concentrating because of an earache (got the antibiotic -- we should return to normality, soon). When I got online to work on it a bit more, last night, the auto-save feature wasn't working and Blogger has this hinky condition that keeps a blogger from highlighting, cutting and pasting her own text . . . miserable. So, if the auto-save feature isn't working and you've done some writing without realizing the auto-save isn't working, you're essentially screwed -- you can't even copy into a separate file. Meaning, I lost my second paragraph. I've decided it wasn't so hot, anyway. Therefore, I'm just going to do a question-answer review for this book.

Hello and welcome to Bookfool Interviews Herself! Today, we're going to ask Bookfool some questions about Bundle of Trouble by Diana Orgain.

[scattered applause and one hacking cough from the back row]

Hi. That was a bit melodramatic.

Hello! Yes it was! We love drama! Action! Exclamation points!! So, Bookfool, how did you acquire Bundle of Trouble and why did you choose to read it now?

I acquired the book via Twitter. Diana Orgain and I are twitterers who follow each other and she asked me if I'd like to read and review her book. I warned her I had a rather large backlog. Diana said That's fine; I can wait. That was about 2 months ago. Last week was really just the right time for a cozy mystery because I needed something quick and fun to read. I don't read mysteries often and I tend to let books call to me when they're ready, if there's not a specific due date. Bundle of Trouble let out a piercing scream, much like a very unhappy baby.

You're kidding about the scream, right?

One could say it was all in my head; but, the book was definitely calling to me.

[Man in the front row points and shouts, "You lie!" Not sure who that was.]

Self: Tell us a little about the book and what you liked about it.

Bundle of Trouble is the first in a new cozy mystery series, a "Maternal Instincts Mystery". Since I've already briefly described the book, I'll stick to what I liked. I thought the mystery in Bundle of Trouble was nicely done, never confusing but with enough threads to keep the pages turning. And, I absolutely loved the fact that Kate Connolly didn't want to go back to her office after her maternity leave ended because that would mean leaving the baby with a caregiver. That's something I can relate to -- the horror at the idea of leaving a baby all day. I couldn't imagine letting someone else see all the firsts, read the stories, put together the puzzles, etc., with my kids. For a good portion of the book, Kate occasionally muses about and works toward figuring out how she can turn snooping into a legitimate private investigation business.

The story is set in San Francisco, where the author lives, and I loved that. San Francisco is nothing short of awesome, in my humble opinion -- a fantastic setting. Because it's an expensive place to live, it also figures into Kate's yearning to stay home with her baby. The Connollys simply can't afford to do without her income, so she's presented with a financial dilemma on top of figuring out how to be a mother and solve a crime (actually, more than one crime). Also, Kate's a listmaker and her lists can be pretty funny.

You sure do talk a lot.

So does my cat.

Was there anything you disliked about the book?

Yes, a few very petty things. I thought some of the everyday scenes with baby were a little boring. But, I think that was at least in part because this novel sets the scene, being the first in a series. Also, I loved the way Kate referred to her daughter as "jelly bean", "pumpkin pie" and a whole bunch of other cute names. However, I don't recall a single conversation with her spouse in which she said those names aloud. So, when her husband called the baby two of those names in separate conversations, it threw me a bit and I didn't like that. I'd like to have seen a funny conversation that revealed a little bit more depth to the characters. A chat between the parents, in which they call the baby all sorts of silly names, would have been a nice addition. In general, the characters could have stood a bit more dimension.

The cover is cute. I love that cover.

It's a good read but because I read so few cozies I don't feel like I can give it a numerical rating. Gradewise, I'd give it a B-. But, I don't do that. If you're a cozy lover, I think you'll enjoy the book. If you're a frustrated new mother, you might enjoy relating to the protagonist. It's a nice start to a series.

And, what do you think of the weather?

It sucks. Muggy, rainy, blecch. Even the cat is disinterested in going outside.

You're telling me. Why is the audience leaving?

I think we're done!! Wait! And, now for our shocking conclusion, we will show you where Bookfool's husband went without her, last week!!!! 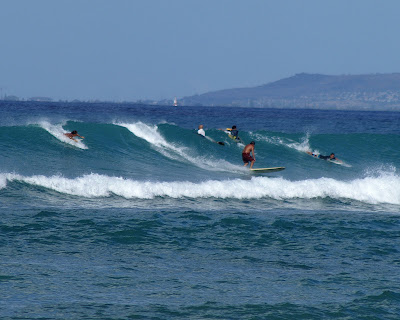 Bookfool says to Self:

That is so wrong. At this point, things get so freaking confusing that the interview ends and the stragglers look for a Coke machine.

Are you a cozy mystery lover?

The best place in the galaxy for cozy fans (in my personal humble opinion) is Not Enough Books. Kris hosts a rocking fine cozy mystery challenge.

I am really, really enjoying the Book Blogger Appreciation Week posts that I've managed to read. I can't wait to join in next year. We've been very fortunate in that the weather has been breaking during swim practice, so we're still doing the swimmy thing. Wahoo for that!

Don't forget! I have two drawings going on, at the moment:

The Way Home by George Pelecanos

- drawing ends Sept. 21. And you get to guess my cat's favorite vegetable. What could be more fun?

The Smart One and the Pretty One by Claire LaZebnik - drawing ends Sept. 27. To enter this one, you get to tell me where you would go if you could travel any place on the planet. Because, you know, I'm curious.

I'll have more drawings coming up, soon, 'cause I figure giving away books from Hatchette is a way to channel joy. I'm really into joy channeling.

Bookfool with (according to Chris in New Orleans) "cute ears". Hahaha. I just love that.