Abide with Me by John H. Parker and Paul Seawright (review) 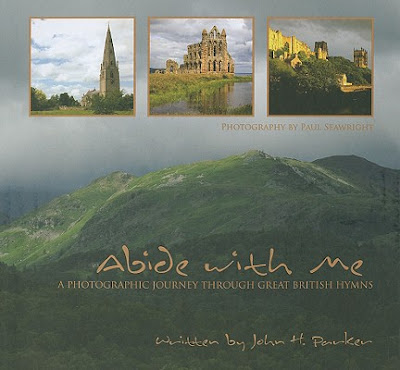 The subtitle of Abide with Me pretty much says it all: "A photographic journey through great British hymns." Author John Parker and photographer Paul Seawright traveled around Great Britain and Wales seeking out the origins of well-known hymns and their composers. Abide with Me is packed with beautiful photos of churches, graveyards, villages, home interiors and scenery. Each chapter describes a particular writer and how he or she entered the world of hymn writing, what they did for a living (not all were ministers), how they were influenced by their contemporaries, families, and surroundings.

I was particularly fascinated to find that ministers often wrote songs to accompany their sermons, keeping the verses in line with their theme for the day and, in the process, often becoming prolific songwriters.

Abide with Me is slender but it's coffee-table quality. It comes with a CD of hymns, which were recorded in a form as close to the original as possible. The music is rich and lovely. It's a very relaxing CD to listen to -- so much so that I've never made it to the end. I get nice and sleepy and turn it off. I've listened to the majority of the songs, though, and they're sung a cappella by, I believe, two separate choral groups, although I don't have the CD handy to check that tidbit.

I have a few minor complaints about the book. The photographs aren't captioned; instead there's an index of photographs in the back of the book. I hate flipping back and forth, so that annoyed me. Also, the text and photographs don't match as well as I'd hoped. For example, when the author describes a Norman tower overlooking the graveyard where a songwriter/minister is buried or speaks of a glorious stained-glass window that depicts the subject's life, I expect to see photographs of whatever is discussed on that page. The text usually only takes up 1/2 to 1/4 of each page and there's often one large photo with three more inset, so laying out the photos to closely align with the text could have been easily accomplished. Instead, you may end up looking at some building that exists in the town where a minister lived and end up having to flip to the back of the book to see if the Norman tower is in the book at all.

Minor complaints aside, I thought the bios were fascinating and I enjoyed reading about the author's and photographer's experiences with people who kindly gave tours of various buildings and helped to bring historical reference points to life. Amazon sells the book with its accompanying CD for a mere $14.99. At that price and given the quality of the music and photographs, it's a great bargain and would be excellent for gift-giving.

4/5 - Very good. Lovely photos, interesting text, fantastic music. On-page identification of photos and a layout that made relevant photos fit the text a little closer would have made the book even better.
Posted by Bookfool at 9:56 AM