Reading . . . fell down on the job in September 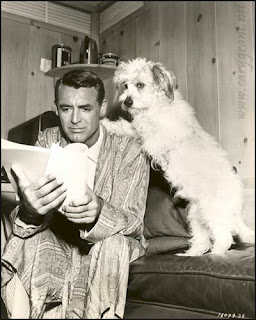 At least I didn't have to memorize what I read, like Cary. And, the dog, apparently. I managed to read 9 books, this month, but compared to last month a

nd the month before and the list of books I planned to read . . . pitiful. So, I'm trying to be happy with what I read and just stare at Cary because how could you not enjoy looking at that face for any great length of time? Yeah.

1. Vanishing by Candida Lawrence (NF/Memoir) - One of 4 memoirs by an author who writes nothing but essays. I found myself instantly bristling; I simply did not like the author. Some of her stories were interesting, but I had trouble getting over my personal discomfort with the writer. It's a quick read; the writing is rather lyrical if you can stand her. It's probably just me.

2. The Greatest Knight by Elizabeth Chadwick (Historical fiction) - The story of William Marshal, a knight who became a favorite of Eleanor of Aquitaine and served under several kings during the time when England and Normandy were closely aligned. It took a while for me to get into this one and then I absolutely loved it. The detail is amazing.

3. Abide With Me by John H. Parker (NF/Photography/History) - A slim, coffee-table type book of photographs and historical sketches describing the people who wrote well-known hymns and the lands from which they hailed. This is a beautiful book and I loved the bios but the photos don't align well with the text, so a lot of flipping is involved. The enclosed CD of hymns is simply wonderful.

4. Bundle of Trouble by Diana Orgain (Cozy Mystery) - A new mother becomes involved in a mystery when a body turns up and the police suspect the dead man is her brother-in-law. When other ties to her family emerge and more people die, she decides maybe she can turn snooping into a home-based business (because she really doesn't want to return to her office job). A good start to a series; characters could have used a bit more depth, but it's a fun book.

5. House of Dark Shadows by Robert Liparulo (YA/Fiction/Paranormal) - This is a nice, creepy story that isn't nightmare-inducing (there's some violence but it's not too gory) about a family that moves into a house with strange, dark secrets -- portals through time, a 40-year-old disappearance and . . . well, Bigfoot or some kind of creature that kidnaps people. Loads of fun, the first in a series, and surprisingly believable for the subject matter. This was my second read for the RIP IV.

6. Sometimes We're Always Real Same-Same by Mattox Roesch (Fiction/General/Alaska) - Cesar's brother is in jail for life because of a gang-related murder and Cesar has done some terrible things, already. To prevent losing both of her sons to the same fate, his mother moves both of them to her hometown: Unalakleet, Alaska. There, he is taken under the wing of his cousin, Go-boy. But, Go-boy has problems of his own. Tackles quite a few issues and I had a little trouble figuring out what the author was after, for a while, but eventually I really got into the story and love the theme that we're all human and alike in many ways.

7. 31 Hours by Masha Hamilton (Fiction/Suspense/Terrorism) - Jonas has not called or spoken to his mother or girlfriend in several weeks. His mother has a bad feeling and Vic is worried, although she also has her sister to watch out for. As the two women search for Jonas, he is staying in a safe-house, preparing for an act of unspeakable violence. Gripping and well-written, but the real impact of the book lies in the depth of its everyday characters, like a homeless man, who will undoubtedly die if the terrorists succeed.

8. The Treasures of Venice by Loucinda McGary (Romance/Adventure) - Ditched by her fiance, Samantha decides to go ahead and take her honeymoon trip to Venice alone and gets swept into kidnapping and intrigue when an Irish rogue pretends to know her and she plays along. They must find the Jewels of the Madonna to save his sister's life. There's a parallel romance that takes place in 1485 and involves the same jewels. A little cliche, but a nice escapist read.

9. Pale Phoenix by Kathryn Reiss (YA/Paranormal) - Miranda can't stand Abby Chandler, so she's not thrilled when Abby comes to stay with her family. There's something very strange about that girl. When Miranda hears Abby crying but she's not there . . . and follows her, only to find that her footprints suddenly stop in the snow, Miranda's suspicious. And, when she sees Abby's collection of photos -- all of Abby but from different time periods -- she knows something is amiss. What does the ancient carving of a phoenix have to do with Abby's disappearances? Can Miranda help save Abby from a fate worse than death? Fun, quick reading and a nice paranormal tale with a great ending. This is my third read for the RIP IV.

I'm behind on a few reviews that were slated for September. I beg patience of anyone who is bouncing upon tippytoes, awaiting Bookfool's Cherished Ponderings. Or, you know . . . whatever. A few I read well in advance of their due dates and then when the time came to review, I was in the mood to sleep or standing around snapping photos of teenagers, or the words didn't come to me and I chose to let them hang, etc. Today, I've also spent time squeezing ointment into a kitty cat's bloody eye. Poor kitty cat.

I hope to do some serious reading and catch-up, this month. Prayer would be welcomed. Knocking wood, tossing salt and other lucky things are fine, as well.

I'm off to bed. I do believe I'll read a bit before I nod off. How about yourself?

Bookfool, whose cat is in serious need of affection and therefore it looks like I'm going to be squeezing my feet into that small space next to her
Posted by Bookfool at 10:34 PM