The Greatest Knight by Elizabeth Chadwick 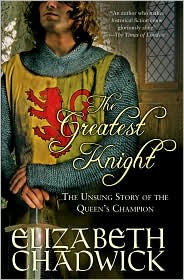 I've mentioned that I refer to myself as History Stupid several times on this blog. It's because I'm so shy on knowledge of history that I particularly appreciate an author who is known for her historical accuracy. There will always be assumptions made and gaps filled out in fictional stories about historical events or characters, but it's great knowing when you're actually learning about real people and events in a manner that brings reality to color and life without sending you down the garden path.

That's a round-about way of saying I think I've found a new author (new to me, that is) with whom I am completely besotted. I'm already plotting to locate every bit of historical fiction Elizabeth Chadwick has ever written. Pray my library loves me enough to carry her books because we're still in overload, here, in spite of several months of purging.

The Greatest Knight tells the story of William Marshal, a knight who became a favorite of Eleanor of Aquitaine and served under several kings during the years when England and Normandy were closely aligned. Frequent skirmishes over land holdings, castles and power took place in both England and France during this time period.

When the book opens, William is trying to sleep on a pallet in a drafty part of a dining hall with the rest of the knights. He's brand knew to knighthood and shows himself to be a courageous, albeit slightly reckless, knight during his first battle. From these crude beginnings, he shapes into one of the greatest knights of the Middle Ages.

I'm going to copy the description from Paperback Swap because I'm not certain I can describe it as well:

Based on fact, this is the story of William Marshal, the greatest knight of the Middle Ages, unsurpassed in the tourneys, adeptly manoeuvring through the colourful, dangerous world of Angevin politics to become one of the most powerful magnates of the realm and eventually regent of England. From minor beginnings and a narrow escape from death in childhood, William Marshal steadily rises through the ranks to become tutor in arms to the son of King Henry II and Eleanor of Aquitaine. A champion on the tourney field, William must face the danger and petty jealousy targeting a royal favourite. Dogged by scandal, banished from court, his services are nevertheless sought throughout Europe and when William's honour is vindicated, he returns to court and wins greater acclaim and power than before. A crusader and the only knight ever to unhorse the legendary Richard Coeur de Lion, William's courage and steadfastness are rewarded by the hand in marriage of Anglo-Irish heiress Isobel de Clare, 19 years old, the grandaughter of kings and his equal in every way.

I loved the detail and the senses in this book. When William Marshal was filthy from rough conditions at battle or tournaments, there was always this sensation that you could smell the dirt and sweat, hear the clanking of metal, feel the cold and damp. The Greatest Knight is absolutely packed with the senses. Chadwick also is skilled at writing just the perfect amount of description and interspersing it with dialogue. The characterization is magnificent, as well, although there were times that I wondered if William was just a little bit too perfect.

5/5 - LOVED this book. This is apparently the second in a series of 4 books and I will definitely want to read them all. There's a slight bit of graphic sex, so it comes with a family warning. I don't think it's anything that will corrupt the kiddies for life if they get hold of it, though.

There's some interesting info about William Marshal at Brits at Their Best.

My posts are a bit brief, lately, at least partly because of swim season. I spend a lot of time taking photos at the pool and even more time deleting, cropping and uploading the best photos to a completely separate blog (with a different password, so I can't approve messages or work on book reviews while I'm loading photos . . . kind of a pain, but I thought the whole Bookfool persona would confuse the other swim parents). I'm sure I'll be back to my normal chatty self in about a month or so. Swim season is very short, this year.

One hour till pick-up time. I'm off to take a 20-minute nap. Happy reading!

Sleepy old Bookfool
Posted by Bookfool at 9:24 AM