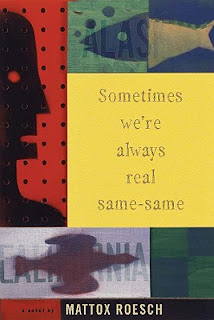 He's in the driver's seat, looking out at a single row of telephone poles that veer off the road and run up into the hills. Both of his hands are resting at the bottom of the wheel, at six o'clock. He leans back, pulls up his right sleeve again, and shows me the sketch that runs along his forearm. "It isn't real," he says. "I've drawn it on about fifty times with ink-pen." He tells me he's planning to get the permanent kind later that summer.

"I thought about getting some too."

He holds the inside of the wheel at twelve o'clock with that arm, his sleeve hiked to his elbow. He points to parts of the drawing with his left hand. "This will be Native Jesus. She's reaching into the clouds on this side and the sea on that side."

There were three things that attracted me to this book (besides the title, which I think is one of the best titles I've heard all year):

2. The story takes place in Alaska.

3. I'm crazy about that cover.

I'm not sure those are the best reasons to read a book, but they seem to have worked in this case. Unbridled Books carries a broad variety for a small publishing company and their gorgeous covers, in my humble opinion, reflect respect for authors. I admire them for that.

Cesar is a 17-year-old Los Angeles gang member. His brother is serving a life sentence for gang-related murder and his mother wants to remove Cesar from the area to prevent him from ending up in jail like his brother, so she and Cesar move to her home territory: Unalakleet, Alaska. Unalakleet is a small village quite far north (I looked it up on Google Earth and it's not that far from Nome, relatively speaking). Everyone knows everyone and a lot of them are related.

Cesar's cousin Go-boy, who has visited Cesar in LA, latches onto him and immediately becomes the most important person in his life. Cesar has secrets and guilt about things that he's done. But Go-boy has some serious problems, himself. I don't want to say much more about the storyline because there's a lot to this book that I don't want to spoil. One thing I found interesting was that the story explores spirituality along with mental illness, family life and gang activity. I've read a lot of Christian books (i.e., published under a special line or by a company that only publishes clean or Christian-themed titles) in 2009 and a good portion of the novels have hardly anything about God in them at all. By comparison, this book is really heavy on conversations about God. That may be irrelevant but I found it fascinating.

threw me, at first. I had a little trouble getting into it and becoming accustomed to the author's voice, then I spent a lot of time trying to figure out the author's objective. What was he trying to say? Where was he headed? Go-boy is mentally ill so his often-rambling comments about spirituality are over-the-top. I found myself wondering whether people find this kind of viewpoint of God more acceptable than central characters who express their beliefs without mental illness as an explanation. Go-boy's illness is practically a character in and of itself and could stimulate some interesting discussion in a group setting.

While I was reading, I found a guest blog post by Mattox Roesch at The Bookmark at the U. It helped me to understand where the author was coming from. Once I read that blog post, I whipped through the second half of the book and really enjoyed it. The story has continued to roll around in my head since I closed the book, 4 days ago. There's a lot to think about and discuss. I liked the way the book ended. I liked the way the book made me think. In the end, Cesar (who changes his name near the end of the story) is still a teenager but perhaps a bit more mature and balanced. He has slowly grown to love his small Alaskan community and to understand the benefits of living an exposed life, where you can cover up the past but you can't hide the present.

There was one thing about the characters that bugged me. Throughout the book, Go-boy and other people in Unalakleet refer to themselves as "Eskimos". Our former swim coach is from Alaska and I know he has said the word "Eskimo" can be offensive to certain Alaskans. The author lives in Unalakleet so I'm figuring he knows what he's talking about, but it still bothered me so I wrote to M. and asked him what he thought. He said there are places the word is acceptable. Where he comes from, the native tribes are Haida and Tlingit. You don't call them Eskimos; they're tribal natives. But, farther north . . . he wasn't certain and said he'd ask around but thought it probably was fine.

I'm having that "I sooo do not want to rate this book" feeling, again. I have mixed feelings. It took me so long to get into Sometimes We're Always Real Same-Same that I didn't think I was going to end up liking the book at all. But, then once I got a grip on the themes the author intended to explore, it suddenly became a book that meant something. There was one question that I thought the author left totally hanging and I didn't care for that. In general, though, Sometimes We're Always Real Same-Same was nicely wrapped up and I like that title/theme that we're individuals but in many ways we're all alike. We're all human. And, the Alaskan setting was great.

Okay . . . hmm. I'll say 3.75/5 - thought-provoking writing, a little inscrutable at the beginning but with a solid conclusion. Definitely recommended. I think it would have helped to read the author's blog post before I began. There are some rather horrifying descriptions of Cesar's gang activity and in some ways he never seems to quite get how wrong his brother's offense was, in spite of guilt over activities in which he took part, so I'd rate this somewhere between PG-13 and R.

Musings of a Bookish Kitty

One of my favorite photos from our vacation in Alaska: 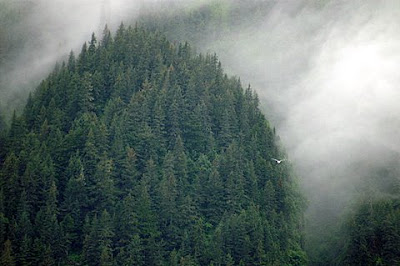 I finished 31 Hours by Masha Hamilton, last night, so I'm going to try to hammer out a review of that story, next. Gotta run to pick up kiddo. Hope everyone's having a happy Monday!
Posted by Bookfool at 12:00 PM