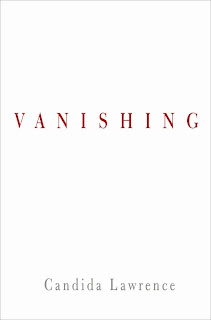 Vanishing by Candida Lawrence
Copyright 2009
Unbridled Books - Nonfiction/Memoir
275 pages
Hmm. Ever have trouble putting your thoughts together for, like, 4 or 5 days after you finish a book? I feel that way about Vanishing. Candida Lawrence is, from what I gather, a writer who writes only essays about her life experiences. Vanishing is the fourth of her books.
So, why am I having trouble gathering my thoughts? I think because this book ran hot and cold, for me. The first couple of stories . . . I don't know how to put it other than to say that I took an immediate dislike to the writer. But, then as I continued reading I softened toward her a bit. Unlike the most recent memoir I read prior to Vanishing (Don't Shoot! We're Republicans!), I never did get the sensation that, "This is the kind of person I would love to get to know." I think the moment that I began to feel as if I was just tolerating the author might have been during the essay in which she was preparing to leave her California home as a nearby fire threatened. While trying to decide what to take with her, she considered taking her daughter's cat but leaving behind the new kittens because the cat could always have more. Then, she pondered the inevitable tears if the house were to burn with the kittens inside and changed her mind. The house didn't burn, but my opinion of the author was left in ashes.

Second, as I read one of the final essays (it may have been the final story) I realized that all the way through the book I'd thought Jack -- a man who remained in her life, off and on, for decades -- was also her ex-husband. Nope, not so. In fact, I don't believe the ex was named until that final chapter. So, I closed the book feeling as if I had only understood a small portion of it.

Still, I wouldn't say, "Don't read this book." I personally found the author unlikeable, but that's at least in part because her morals and values are so far removed from my own. That's obviously not going to be the case for everyone. I did think her writing was a little too artistic for my taste, as well. In a memoir, I like a straightforward style and a sense of humor. Sometimes I wasn't certain what was going on, but I think it was simply a matter of not quite getting her personal style.

- Disappointing. Didn't like the author's personality or her writing style, although some of the individual essays were very, very interesting. In one case, I wished I could call her up and say, "Did this really happen?" because the tale was so surreal and terrifying that I almost had myself convinced it was fiction. This book has some explicit scenes and is not family friendly.

Interesting sight of the week: 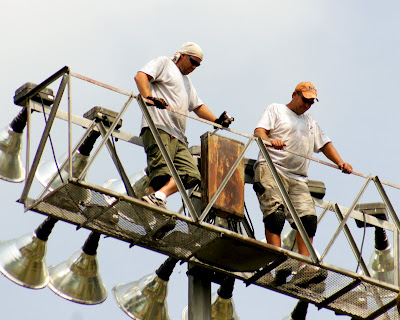 When I arrived at the pool, one day, these fellows had just finished replacing a set of stadium light bulbs and were waiting for their ride, which was attached to a crane. Coolness. They actually made it into the paper, although I didn't see the newspaper photographer.

I am almost finished with The Greatest Knight and already dying to read the further adventures of William Marshal. I think I can safely say I'm a new Elizabeth Chadwick fan.

What are you reading?
Posted by Bookfool at 5:37 PM