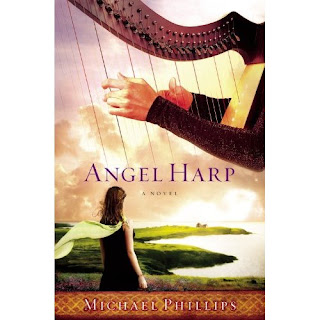 Angel Harp
by Michael Phillips
Copyright 2011
FaithWords - Fiction
464 pages
(DNF)
I loved the description of Angel Harp: A 40-year-old widow travels to Scotland after realizing she has gradually let her dreams slip away. Intent on trying to recapture the dreams of her younger days and live her life before it's too late, she sets aside three weeks to travel where her heart leads her and eventually settles on staying in a small village.
While living in the village, she becomes swept up in a love triangle involving the local curate and the local duke, which seems to be a repeat of a love triangle that happened in the past. The villagers also become fond of her as she becomes known as the "Harp Lady" and is asked to play or give lessons by various villagers.
Unfortunately, I only made it to page 74 of Angel Harp. My problem? The book was written mainly as internal monologue. The narrator, Marie Buchan, plays the harp and gives lessons. But, almost everything that occurs is internal. Only short bursts of dialogue are interspersed within pages and pages of Marie thinking about her life, her music, and her lost dreams, pondering Scotland and eavesdropping a little, then -- when she meets two people who intrigue her -- wondering how she can get to know a young girl who may be a savant and what's up with that red-headed curate.
I flipped ahead to see if the pattern of lengthy narrative with only occasional dialogue continued and found that it appeared that the dialogue picks up a little, but the book is still heavily narrative-based and internal. It was just too much narrative for me. As I've said repeatedly, I like plenty of action -- even if action simply involves interesting conversations and emotional entanglements, as in a Jane Austen novel. There was simply not enough happening to keep my interest.
Angel Harp is an "inspirational" novel, but at the point I stopped Marie was a former Christian reflecting upon how she'd given up her faith. The curate had told her her beautiful harp music came from God, then convinced her to play in an empty 12th-century church. It was a little confusing on the God front. Marie was raised a Christian and it's not clear exactly when she gave up her faith but her husband was not a believer and it sounds like she became frustrated with church members trying to pray him into belief and worrying aloud about her being "yoked" to a nonbeliever. Then, when he died that sealed the deal. When she describes herself as "not a church person", it's a little hard to reconcile that with her past, as it unfolds. She has no real reason to be wary of playing in church. It's not an unfamiliar setting.
I guess I'd recommend this to people who like a lengthy inspirational romance set in Scotland and don't mind narrative dominating the story. I craved more interaction with people and became impatient with the book quite early on. When it didn't seem to pick up, I set it aside unfinished and I don't plan to give it a second try. You can read a free chapter of Angel Harp to decide for yourself.
My thanks to FaithWords for the review copy.
It's been a long time since I went to Scotland -- 35mm film days! So, I have no shots of Scotland. Instead, you get a picture of Ireland from the air. Hmm. Close enough. See the road leading to something by the cliffs? I like to imagine that's the ruins of a castle. The photo is poor quality, so I can't tell, even when I zoom in on it. But, my romantic side likes to imagine castle ruins by those cliffs, a cold wind off the sea and and couple who just happen to meet as they stand near the ruins, wishing to find love. 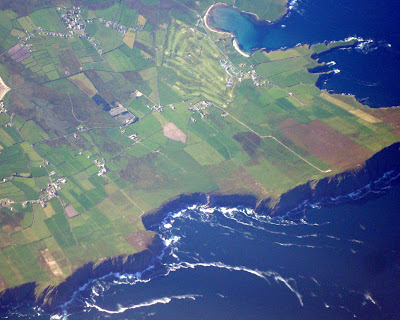 ©2011 Nancy Horner. All rights reserved. If you are reading this post at a site other than Bookfoolery and Babble or its RSS feed, you are reading a stolen feed. Email bookfoolery@gmail.com for written permission to reproduce text or photos.
Posted by Bookfool at 6:01 AM