The Ingram Interview by K. B. Dixon 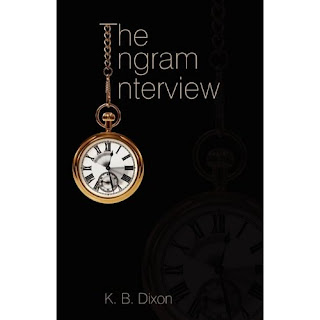 The Ingram Interview by K.B. Dixon
Copyright 2011
Inkwater Press - General Fiction
121 pages
Mrs. Syms . . . was a strange kind of crazy--sort of like Lee Harvey Oswald's mother. She talked a level-headed sort of nonsense. She was batshit, but she didn't seem like it--not at first, anyway.
-- from p. 52 of The Ingram Interview
I told him basically I don't like music that is decibel-dependent, painting that is concept-dependent, novels that are dialogue-dependent, or movies that are spectacle-dependent.
-- from p. 62 of The Ingram Interview
I said Mr. Mitchell [David Mitchell, author of Cloud Atlas] was a writer of preternatural facility and abundance, that he was an enigma to me, that the book was a linguistic extravaganza, but that I had found I didn't have a lot to say after "wow".
-- from p. 89 of The Ingram Interview
The Ingram Interview tells the story of Daniel Ingram, a retired English professor who has been very ill, possibly from a heart attack. At the beginning of the book, he is just about to be forced to leave an assisted-care facility because of his bad attitude (he's depressing the other residents). He moves in with a former student of his, Michael, and Michael's partner, Jessica. While writing his memoirs, he continues to attempt to convince his ex-wife, Emily, to return to him, slowly learns to cope with his awkward living arrangements and eventually moves on to another assisted-care facility. Told entirely in interview format, the book is described in the cover blurb as "unrepentantly quirky".
What I loved about this book:
You can tell from the selection of quotes, above, that the author does indeed have a unique and very quirky style of storytelling. The Ingram Interview is my second read by K. B. Dixon (I read and reviewed The Sum of His Syndromes in December of 2009) and I've found there are lots of gems to be mined from his books. They're short but densely packed with thought-provoking, savvy, wise and often funny observations.
What I disliked about the book:
I felt a little adrift as I was reading The Ingram Interview, to be honest. I talked to the author, Ken, about the book and mentioned that I thought perhaps the large come-and-go cast might have something to do with my confusion. Ken told me he thought of the book as a character study. During most of the book Ingram is simply existing, waiting for Emily, hoping she'll show up and observing the people who walk in and out of his life.
The interview format became a little tiresome to me, also. I think as a character study the book is done well. I'd hoped more would happen and that's really just because I have a preference for lots of action in a book. The author told me he considered naming the book "Waiting for Emily" but thought it might sound a bit self-aggrandizing to use a title that played on the title of a famous work (Waiting for Godot). Personally, I think "Waiting for Emily" would have been an excellent title choice.
The bottom line: WARNING - This part might be considered a spoiler. Skip it if you don't want to know how the book ends.
While this book didn't really work well for me, I think those who prefer characterization to plot will appreciate the way Ingram goes from lonely curmudgeon awaiting his death and hoping his ex-wife will return to him to accepting his lot in life and learning to live, again.
End of spoiler warning. We now return to our regularly scheduled babbling.
Cover thoughts: I love the cover. It's simple and eye-catching. Since Ingram has had a serious brush with death and is obviously aware that he doesn't have all the time in the world, I think it also fits the book quite nicely.
In other news:
Yesterday sucked. I guess I had a stomach virus. Whatever it was, I was sick enough that I didn't manage to summon the strength to read or check email. Boy, am I relieved that's over. If you're going to be sick, you ought to at least be able to read, don't you think?
Fiona only came in to say "hello" once (at least that I remember), but Isabel kept returning. During the times I managed to sit up, she climbed up onto my shoulder and purred in my ear. I love that. Today, she's being a total hellion. I think Fiona needs a vacation. After yesterday, I'm pretty sure I could use one, too.
©2011 Nancy Horner. All rights reserved. If you are reading this post at a site other than Bookfoolery and Babble or its RSS feed, you are reading a stolen feed. Email bookfoolery@gmail.com for written permission to reproduce text or photos.
Posted by Bookfool at 11:54 PM

Email ThisBlogThis!Share to TwitterShare to FacebookShare to Pinterest
Labels: book reviews, general fiction, recommended but not a favorite