Brownie Groundhog and the February Fox by Blackaby and Segovia 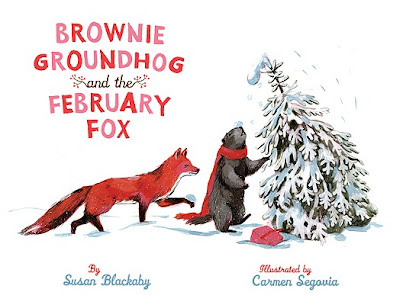 Brownie Groundhog and the February Fox by Susan Blackaby
Illustrated by Carmen Segovia
Copyright 2011
Sterling - For ages 3 and up
32 pages
Brownie Groundhog wakes up on the 2nd of February and emerges from her cozy den into the snow, where she sees her shadow. When a groundhog sees its shadow, of course, it means six more weeks of winter. Brownie stomps her foot and a fox hears her "grousing". He prepares to pounce, but Brownie is far too ingenious to get eaten.
Before Brownie could take two steps, the fox knocked her flat. Brownie's basket went flying as they tumbled into a snow bank.
The fox panted and puffed. "Hold still," he said. "I'm trying to eat you for breakfast."
"Don't be silly," said Brownie, wiggling free. "You're too late for breakfast."
"Really?" The fox frowned. "What about lunch?"
"Too early," said Brownie. "You'll just have to wait."
"I hate waiting," said the fox.
"I know what you mean," said Brownie.
By this point in Brownie Groundhog and the February Fox, I was totally in love. Brownie has figured out how to outfox the fox, but the fox is determined to hang around until it's time to eat her, so she comes up with imaginative tasks (clear the pond with your tail . . . and then we must skate on it) to occupy him and then declares it's too late -- he missed lunch! Eventually, Brownie ties the fox to a tree and the fox sobs, so Brownie takes pity on him and promises to make them both a snack if the fox will promise to "keep your teeth to yourself." And, then they see signs of spring.
When Brownie Groundhog and the fox part, the fox asks, "What are we doing tomorrow?"
"More waiting," said Brownie.
"Waiting and skating," said the fox. "Will you bring something yummy?"
"Something yummy to share," said Brownie.
And they headed for home.
What a clever book! I loved the interaction between the fox and the groundhog -- it's genuinely funny and imaginative. The illustrations are marvelous and limited to about five or six colors on a snowy-white and beautifully shaded background, which gives it a consistency of design that I just love. And the book is comfortably readable. I read it to my cats several times because I like it so much and I'm afraid they're going to have to listen to quite a few rereads.
Brownie Groundhog and the February Fox was a surprise sent to me by Sterling Kids. Many thanks to Sterling!! I'm so excited about this book that I'm going to keep it handy. Really, I need to find some kids. It's definitely such a fun book that I feel like going in search of some preschoolers to read to.
The bottom line: Adorable illustrations and a clever storyline make Brownie Groundhog and the February Fox a new favorite in this household (ask the cats -- they love it, too). Highly recommended for anyone but the promotional material says ages 3 and up. Go ahead, buy a copy and read it to your cat, dog, husband, the wall. Or . . . if you have children, you can read it to them or hand it to them, if they're old enough to read on their own -- it's awfully fun; I wouldn't limit it to preschoolers.
©2011 Nancy Horner. All rights reserved. If you are reading this post at a site other than Bookfoolery and Babble or its RSS feed, you are reading a stolen feed. Email bookfoolery@gmail.com for written permission to reproduce text or photos.
Posted by Bookfool at 9:20 PM