The Dragon and the Turtle Go on Safari by Paul, Denmark and Nguyen (review) 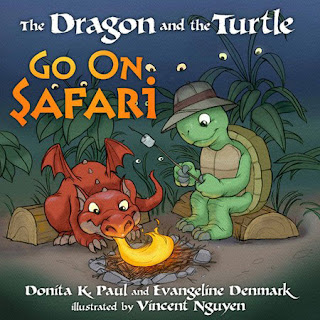 The Dragon and the Turtle Go On Safari
By D. K. Paul & E. Denmark
Illustrated by Vincent Nguyen
Children's - Ages 4-8
Copyright 2011
Waterbrook Press
40 pages
I love reading children's books but apparently I have to be awake to read them. The first time I picked up The Dragon and the Turtle Go On Safari, I was baffled. I was also very sleepy. The second time I read the book, it made total sense. Let this be a lesson to Bookfool. Read while awake.
The Dragon and the Turtle Go On Safari is the story of a camping trip taken by Padraig the dragon and his best friend, Roger the turtle. There's a mix of reality and make-believe as they imagine themselves on safari, camped out at the base of Mount Sillymanborrow. Really, they're in a tent in Roger's backyard.
As they cook their supper (baked bugs and s'mores) and climb into their sleeping bags, they talk each other through the strange sounds they hear. A "herd of elephants" is really a raccoon (humorously shown as a raccoon with an elephant trunk on one page while the opposite spread shows the imagined herd of elephants). A "rhinoceros" is a dog. At one point, they even venture outside of the tent to save a "leopard", which is referred to as a "leopard-er-kitten."
Although they try to be courageous, Padraig and Roger head back to the house thinking they've failed to last the night and discover it is, in fact, dawn. At the end of the book is a bonus story that explains the name "Mount Sillymanborrow" with some thoughts about courage, honesty and the how Padraig and Roger treated each other with respect (helping each other, not making fun of each others' fears). There is also a Bible verse about why one need not be afraid.
I liked The Dragon and the Turtle Go on Safari the second time I read it. I think the combination of reality and make-believe in the illustrations are done well and all of the animals have a perky, happy look about them which I love in a children's book. I did think the writing was a little flat and disliked the "leopard-er-kitten" description, which I think could be especially confusing to a new reader. A parent really needs to be present when this book is first read, just in case children don't understand the imaginary animals and setting overlaid upon reality -- although, let's be honest . . . kids figure these things out pretty easily and quickly.
There is at least one reference to God, other than the Bible verse, which gives the book a Christian undercurrent without God becoming the focus. It's really about courage and friendship.
A lovely little book with great illustrations and a strong theme. Read it with a clear head; it can be a little confusing and the writing a bit flat as it's not particularly adventurous. The action mostly involves cooking and chatter about noises in a backyard, plus the rescue of a kitten. Recommended, but I especially advise reading to young children in case they have questions and to generate discussion, at first.
Take a look inside The Dragon and the Turtle Go On Safari to get a better idea of whether this book is for you and your child.
Here's one of the surprising animals I found while on safari in my backyard, yesterday: 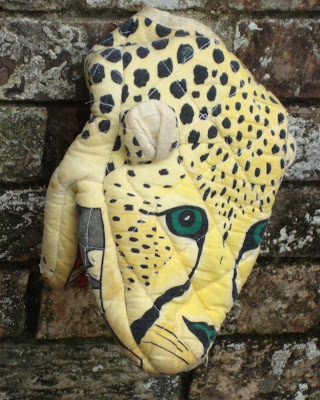 A leopard! Or, rather, a leopard-patterned oven mitt. Yes, people, this is the kind of thing I get when I ask Huzzybuns to please cover the outdoor faucets before the freeze. After three requests (likely translation in Husbandese: "henpecking"), my dear spouse grabbed an oven mitt and plopped it over the faucet handle without even a rubber band to hold it in place. Fortunately, there was no wind, although Huzzybuns did reply that a rubber band, "would have been a good idea," when I mentioned the possibility.
©2011 Nancy Horner. All rights reserved. If you are reading this post at a site other than Bookfoolery and Babble or its RSS feed, you are reading a stolen feed. Email bookfoolery@gmail.com for written permission to reproduce text or photos.
Posted by Bookfool at 7:56 AM

Email ThisBlogThis!Share to TwitterShare to FacebookShare to Pinterest
Labels: book reviews, children's, recommended but not a favorite, Waterbrook Press