Paris Was Ours, ed. by Penelope Rowlands 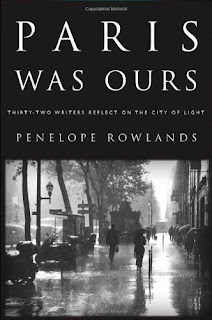 Flâneur (from Wikipedia)
The term flâneur comes from the French masculine noun flâneur—which has the basic meanings of "stroller", "lounger", "saunterer", "loafer"—which itself comes from the French verb flâner, which means "to stroll". Charles Baudelaire developed a derived meaning of flâneur—that of "a person who walks the city in order to experience it".
elegiac (from my handy dandy American Heritage Dictionary) - (adj.)
1. Of or relating to an elegy (a mournful poem or song, especially one mourning a dead person).
2. Expressing sorrow, mournful.
I should have know that one. *headdesk*
The bottom line:
I loved Paris Was Ours. I felt transported to Paris, where a culture that's always perplexed me (as I have French roots, I really desire to understand the French) was explained with flair and erudition. A glossary of French terms and a little better context in the form of a lengthier bio placed just before each writing would have been helpful for the reading of most of the essays -- some authors did translate French expressions, but most did not.
Highly recommended for all readers but particularly for those who have a fascination with France in general or Paris in particular, or the armchair traveler who loves learning about other cultures. I'm going to loan this book to my son, who spent several weeks in France and will undoubtedly enjoy Paris Was Ours. I intend to reread it, eventually -- next time, with a French dictionary or a computer handy.
Some favorites:
I loved Jeremy Mercer's essay, "My Bookstore High", an excerpt from his book Time Was Soft There, about the time he spent living in Shakespeare and Company. Judith Warner's "Toward a Politics of Quality of Life," is a fascinating comparison of American feminism vs. the kittenish, pouty feminism of the French that I think would be of particular interest to those who are participating in challenges involving feminist issues.
There are several essays in which the acceptance of sexual orientation is mentioned but I didn't mark them. However, I was particularly interested by a comment that if a gay couple is invited to a party in New York, someone will seek them out to reassure them that they're very welcome, while in Paris the same couple will find themselves treated like everyone else, their orientation accepted to the point of being nothing of any interest.
I found Stacy Schiff's essay, "In Franklin's Footsteps" amusing and informative. And, I kept thinking to myself, "Stacy Schiff, Stacy Schiff. Where have I heard that name?" I looked her up and discovered that I have her biography of Antoine Saint-Exupery. It just happened to be sitting in a prominent place in the den because I pulled it off a shelf and set it aside, thinking, "I've got to read this one!" while cleaning some shelves, about two weeks ago.
Gushy thanks to Michael of Algonquin Books for the copy of Paris Was Ours.
Tomorrow I'll review Brownie Groundhog and the February Fox by Susan Blackaby, another surprise book, this time from Sterling Kids. It's a book that I love so much I fear my cats are going to get sick of it, sometime soon. Well, I have to read it to someone!
©2011 Nancy Horner. All rights reserved. If you are reading this post at a site other than Bookfoolery and Babble or its RSS feed, you are reading a stolen feed. Email bookfoolery@gmail.com for written permission to reproduce text or photos.
Posted by Bookfool at 1:50 PM