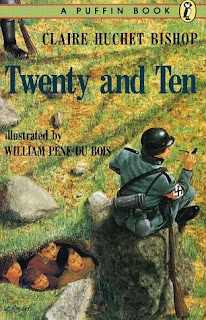 While we were still waving we saw Suzanne slip off Philip's back and run toward us at top speed. She tumbled into the midst of us, shaking from head to foot. "They're coming! They're coming!" she yelled. And suddenly Philip and George were also among us, panting. "They're coming! They're coming! The Nazis are coming!"
"What?" we shrieked, and we all raced up the slope and looked, the smaller ones taking turns on Philip's back.
Far, far down on the valley road two green spots with helmets moved toward us on bicycles.
We looked at one another, terrified. Then I don't know how but Henry, Arthur, Denise, and I, we all said at once, "The cave!" And we ran toward the back of the house. The others followed us.
--from p. 44 of Twenty and Ten
Kiddo and I recently cleaned out one of his cabinets, tossing out junk and setting aside children's books to donate. And, one of the books we came across -- which Kiddo promptly added to the donation pile -- was Twenty and Ten. I was intrigued by the cover image of a Nazi sitting on a rock while children peek out of a cave behind him, so I set the book aside and read it the next day.
Published in 1952 and penned by a Frenchwoman from Le Havre whose grandfather was the village storyteller, Twenty and Ten is based on a true story. And, I must say . . . it certainly has the tension of a real-life Nazi story. The story is about twenty children who are living and attending school together with their teacher, a nun named Sister Gabriel, safe in the hills above their French village. Most of the children are the same age -- about 11, as I recall -- but one of them is the younger brother of one of the girls and he's only 4.
As the book opens, the children are playing a game called The Flight into Egypt about Mary, Joseph and Jesus, and arguing about who gets to play the roles of Mary and Joseph. It's WWII and France is occupied by the Germans, but the children and Sister Gabriel live a fairly comfortable life. Rations are tight but they argue and play like children everywhere in spite of growling stomachs.
Then, one day a young man shows up dirty and starving with ten Jewish children in tow. He asks the nun if the children can stay because he thinks they'll be safest around other children.
Warning: I tell about this story in quite a bit of detail so there may be some spoilers. If you plan to read the book soon, skip this part.
Sister Gabriel and the children agree and the children slowly adapt to each other. At some point, they discover a cave on the school grounds, but it's not till they're playing in the cave and think of the Nazis that they realize the value of their find. And, soon it comes in handy. One day, Sister Gabriel must take the hour-long walk to town to fetch the mail and she doesn't return. The children are on their own.
The Jewish children hide in the cave, one of the boys is taken to a barn and beaten because the Nazis are convinced the missing children are somewhere nearby, and he escapes briefly to let the children know what's happening to him. The children work together to make sure their Jewish friends in the cave are provided with food and water. Then, the youngest child says something that sounds like a confession that Jews are nearby to one of the Nazis. Will the Jewish children be found and taken away?
End spoiler alert. It's safe, now.
I was surprised at what a nail-biter Twenty and Ten turned out to be and, of course, I loved the way the children used their heads and courageously worked together. I don't know if Twenty and Ten is still in print but it looks like ours was the 22nd printing, so I'd guess it's likely still around. Highly recommended for children and adults. And, isn't the cover stunning? There are also illustrations inside, by William Pene du Bois, whom you may know as the author of the Newbery Award-winning book The Twenty-One Balloons.
In other news:
I'm pre-posting this review and will be taking a few days off from the blog while the weather is nice. Not sure when I'll be back, apart from sometime next week. If you leave a comment and don't see it for a couple of days, don't panic! I moderate comments so it might take me a while to get to them. I'll leave you with a picture of Isabel deciding what to get into next and see you next week! 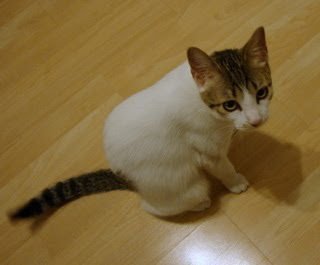 ©2011 Nancy Horner. All rights reserved. If you are reading this post at a site other than Bookfoolery and Babble or its RSS feed, you are reading a stolen feed. Email bookfoolery@gmail.com for written permission to reproduce text or photos.
Posted by Bookfool at 12:15 PM