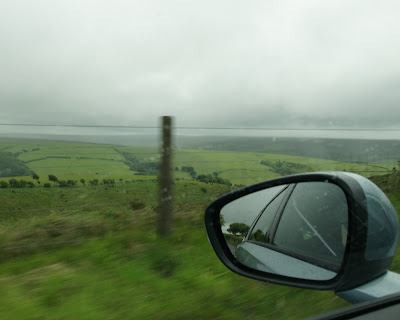 Remember when I returned from England and I said I was hoping to write about my June reads within a few days? Well, that moment of insanity passed quickly. I was so terribly far behind (about 12 or 13 reviews' worth) that it took me a while to get to the point that I could post links to all my reviews.
Now, July is almost over and still I'm a smidgen behind, partly because I haven't been feeling tip-top (hence my absence, for the past few days). But, at least I'm done with June.
Your rear-view mirror view was taken from our rental Peugot as we traveled to Exmoor in England via a lovely, twisty scenic toll road. It was raining, as you can see, but the rain came and went. It was a very pleasant day trip. On to June's reads (with links to my reviews).
June Reads:
67. Proust's Overcoat - Lorenzo Foschini
68. The Art of Racing in the Rain - Garth Stein
69. You Know When the Men are Gone - Siobhan Fallon
70. Regeneration - Pat Barker
71. The Hunchback of Neiman Marcus - Sonya Sones
72. The Revenge of the Radioactive Lady - Elizabeth Stuckey-French
73. Lost in Shangri-La by Michael Zuckoff
74. Dog Tales - Susy Flory
75. The Soldier's Wife - Margaret Leroy
76. My Dear I Wanted to Tell You - Louisa Young
77. After the Quake - Haruki Murikami
78. Casper the Commuting Cat - Susan Finden
I liked everything I read in June, but there were some stand-outs and some that were just so-so reads. My top reads were You Know When the Men Are Gone, My Dear I Wanted to Tell You and The Hunchback of Neiman Marcus with The Art of Racing in the Rain a close fourth . . . and only because I've managed to forget some details from that one -- I loved it when I read it, but for some reason it just didn't stick in my mind as expected. All four of those are books I highly recommend. Oops, forgot one. Regeneration was another that I found gripping, horrifying and fascinating. All five books are highly recommended.
Other books I thought were excellent but which weren't necessarily books I'd gush about are After the Quake (well, maybe a little gushing; I was pretty impressed), Proust's Overcoat, and The Soldier's Wife.
My so-so reads were Lost in Shangri-La, The Revenge of the Radioactive Lady, Dog Tales and Casper the Commuting Cat. So-so meaning I liked them but didn't fall in love with any of those 4 books. In the case of both the pet books, there were entertaining moments and times I thought bad pet behavior was allowed because of cuteness. I get that. There are things I let my cats get away with that I probably shouldn't. But, I thought Casper's owner had an attitude about the indoor/outdoor cat concept that was disturbing and I remember thinking I just don't get the cuteness of bad dog behavior when I was reading Dog Tales. Either way, I liked all those books but they were not among my favorites.
There weren't any books that I strongly disliked, although I made it pretty clear what I disliked in my reviews. So far, nobody has succeeded at shutting me up and apparently y'all like it that I speak my mind.
I've finished several books but not felt up to reviewing, in the past week. I can't say when I'll get over that. Sometimes, when I don't feel like writing, I just walk away for a few days. Usually, I post a picture or two. I am in a mood, so just be happy I've been quiet.
I just finished reading Divergent by Veronica Roth, yesterday. It's a dystopian YA that I bought at the salvage store and started reading in the car. I stopped reading everything else till I finished it. That was one gripping read. I really enjoyed it.
Right now, I'm re-reading Simon Van Booy's Everything Beautiful Began After, this time with Post-its handy. Today, an ARC of When She Woke by Hilary Jordan just arrived in the mail from Algonquin and I am finding it unputdownable. Yes, unputdownable is a real word. I feel kind of awful about the fact that I'm unable to talk myself into waiting to read When She Woke, now that I've noticed the October release date on the spine. Eeks and oh, well. I haven't touched The Beekeeper's Lament in a week, but I'll get back to it.
I unexpectedly ended up back in physical therapy, yesterday. Great, just what I need -- having to drive 60 miles, twice a week, in addition to my intense exercise class and everything else that's going on in my life (so many Big Decisions are being dangled, right now). But, apparently, I need work on my neck. I was starting to get daily migraines, again, and last time I went for regular PT it did help reduce the frequency. It's just all so bloody time-consuming!!! I miss finding the time to write and visit other bloggers. On the plus side, my neck does feel better, today, and I've lost 3% of my body fat during the time I've been working out in my exercise class, The Next Level. I'm still a cow, but I'm a slightly more muscular bovine creature. So, maybe there's hope.
But, I still feel like this . . . 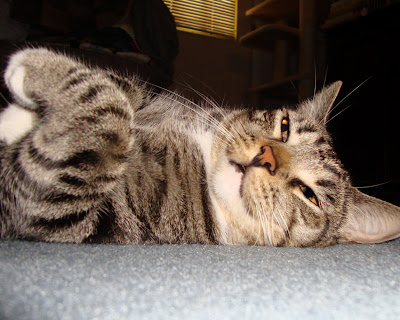 And, I don't look nearly as cute as Fiona when I'm lying around.
©2011 Nancy Horner. All rights reserved. If you are reading this post at a site other than Bookfoolery and Babble or its RSS feed, you are reading a stolen feed. Email bookfoolery@gmail.com for written permission to reproduce text or photos.
Posted by Bookfool at 11:44 AM