The Summer of the Bear by Bella Pollen 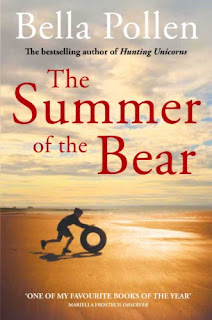 At left is what I presume to be the American cover. I like it but it doesn't really say anything about the book, to be honest, whereas the British cover (the one at top left, which is also the copy I purchased) fits the setting and speaks to me of the innocence of young Jamie, although there's not a scene in which he plays with a tire on a beach, as far as I can recall.
I've found that I do tend to like British book covers better than their American counterparts, but I'm not always certain quite why.
Since the cover leads to the topic of beaches in Great Britain (Is Scotland considered part of Great Britain or is it the UK? I always get confused about that . . . ) here's a shot I took of the beach at Minehead in Somerset: 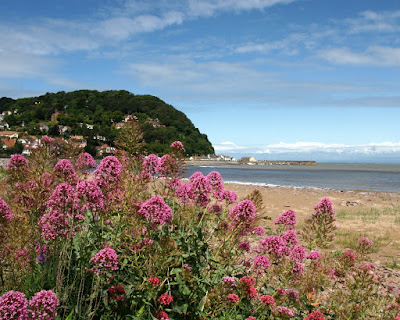 There is a tremendous amount of achingly beautiful scenery to go along with all the amazing history in the UK. I think that's one of the reasons I've continued to find myself drawn back, even though there are many other places in the world that I'd like to travel.
©2011 Nancy Horner. All rights reserved. If you are reading this post at a site other than Bookfoolery and Babble or its RSS feed, you are reading a stolen feed. Email bookfoolery@gmail.com for written permission to reproduce text or photos.
Posted by Bookfool at 11:51 AM