You Know When the Men Are Gone by Siobhan Fallon 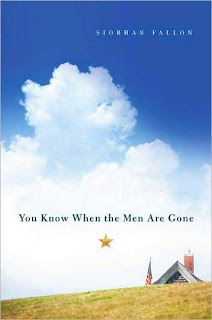 You Know When the Men Are Gone
By Siobhan Fallon
Copyright 2011
Amy Einhorn Books - Short Stories
225 pages
It's been quite a while since I read You Know When the Men Are Gone, but it's still pretty vividly etched in my mind. I cried a lot, for one thing, and not a lot of books require quite so many tissues.
You Know When the Men Are Gone is a series of interconnected short stories about life in the military -- for the soldiers, for the families left behind at Fort Hood, for those who must deal with pain and loss. Affairs, divorce, life-changing injury, illness, death, loneliness, dealing with children during a husband's lengthy absences . . . the author really covers every angle.
The title story begins with the tale of a Meg, an army wife who has no children, no pets, no real friends, only the Family Readiness Group and a couple nosy neighbors to keep her company. Then, a new and exotic neighbor with a big, noisy dog and two quiet children moves in and Meg becomes obsessed with Natalya. The walls are thin and listening in becomes her entertainment. Where is Natalya going late at night, after singing her children to sleep? Who is the man Meg keeps hearing through the walls? Is it worth the long stretches of loneliness and worry to stay married to a soldier?
I wasn't sure where the author was taking me, at first, but the ending to this first story left me a little teary and very satisfied, so I continued on. And, each story fed a little into the next. In the fourth story, "Inside the Break," you hear the words everyone has been afraid may come:
"Alpha Company got hit," she said calmly. "Sergeant Schaeffer died."
Later, you will read about one of the men in Alpha Company who was severely injured. And, the final story, "Gold Star," introduces you to Sgt. Schaeffer's widow.
Checking her watch again, [Josie] finally pulled into the empty Gold Star Family designated spot in front. She waited a moment, peering at herself in the mirror, composing her face into what she imagined an ordinary face looked like, tugging her mouth into a smile but then giving up. She knew the spouses walking by with their loaded carts were hesitating, trying not to stare into Josie's window, trading lifted eyebrows with the other women passing. As she got out and locked her car, a white-haired veteran paused by his truck in the Purple Heart Recipient space a few feet away. He was wearing a black baseball cap with VIETNAM embroidered in block letters across the front. He stepped across the yellow line between them, his ropey-veined hand outstretched.
"I'm grateful for your sacrifice," he said. "Our country can never thank you enough."
He made it sound as if she had willingly offered Eddie up; Josie shuddered but gave the man her hand. This is why she avoided the Gold Star spot: "Gold Star," with its imagery of schoolchildren receiving A's and stickers for a job well done, was the military euphemism for losing a soldier in combat. Family members received a few special privileges like this lousy parking space, but that meant the pity rising from the asphalt singed hotter than any Texas sun. Josie blinked to keep her eyes dry and the vet took a step back, seeing he had inflicted pain. "I'm sorry," he whispered.
pp. 209-210 from "Gold Star," in You Know When the Men Are Gone, ARC (some changes may have been made to the final print version)
I don't know about you, but that's enough to make me fog up. And, the story becomes even more stirring and poignant. I was sobbing when I closed the book. It's a rough read but those of us who aren't married to or close to someone in the military really need to read this kind of book to be reminded what people are going through to protect the lives we love.
It just so happens that I finished reading You Know When the Men Are Gone on the anniversary of the WWII invasion of Normandy, also known as "D-Day". I happened across that tidbit when I was looking for photos to illustrate my review and discovered that there was a dearth of news stories in our national news. Where were the tributes to "D-Day"? I couldn't find them. I was upset enough to write a ranting post that I opted not to publish because it was ventilation and not worth inflicting on anyone. But, the timing was interesting.
There wasn't anything I particularly disliked about You Know When the Men Are Gone, so let's go straight to the ending thoughts.
The bottom line:
A highly recommended book of short stories, written in a plain-spoken style with surprising emotional impact. The author is, in fact, a military wife and it shows. The stories are authentic, powerful, packed with emotion.
Cover thoughts:
I had no idea what this book was about, based on the cover. I just knew it had gotten a lot of very positive buzz and added it to my wish list on that basis. Once you know it's stories about soldiers and their families, the cover makes sense -- the gold star, the American flag. It's maybe a little too understated, but I like the look.
And, your illustration of the day:
Wrong war, but I figured I might as well use this post to stick in a photo from the Churchill Museum in London: 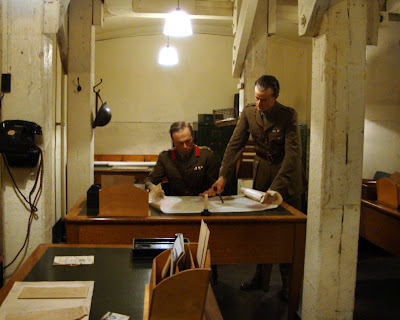 Those dummies look almost real, don't they? Well, of course, they look pretty plastic in person but my husband and I were very impressed with the museum and how the "war rooms" have been restored to look as they did during WWII. If you're ever in London, I highly recommend visiting the Churchill Museum. It's kind of expensive, but worth the cost. I bought my book about Churchill at the museum and I'm thinking I may have to sneak that one in, soon. It seems to be calling to me.
My friend Paula passed along her ARC after she finished it. Thanks, PJ!!
©2011 Nancy Horner. All rights reserved. If you are reading this post at a site other than Bookfoolery and Babble or its RSS feed, you are reading a stolen feed. Email bookfoolery@gmail.com for written permission to reproduce text or photos.
Posted by Bookfool at 12:41 PM