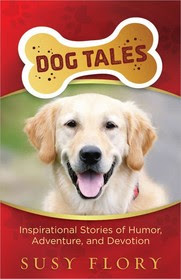 Dog Tales by Susy Flory is subtitled "Inspirational Stories of Humor, Adventure and Devotion." While I've never been a dog owner and am none too fond of the fact that dogs are allowed to run loose where we live, I tend to like dogs on an individual basis -- when I know them well, that is. I'm just telling you that because I know my regular readers are well aware of my love of cats.
In Dog Tales, Susy Flory has chosen a variety of touching, humorous and otherwise interesting stories about dogs. Unfortunately, I don't remember many. That's not to say I didn't enjoy the book. I did. But, it wasn't memorable enough to stick with me for a month. What I mostly recall is impressions. Some of the stories are heartwarming, some sad, some truly amazing.
One story I remember well is the story of a Chow chow (eventually named Ohio). Ohio was filthy with long, matted fur and he spent his days lying in the middle of the street. A huge bear of a dog, he lay around looking depressed; he didn't respond to friendly strangers. A woman named Mary, who lived in his neighborhood, walked past the dog almost daily for a couple of years before deciding she needed to do something about him. After a bit of prayer, she summoned the courage to talk to the dog's owner. The owner hated the dog for reasons I won't go into and claimed he was a danger to her children. That was her excuse for neglect.
Mary asked if she could have the dog and his owner was happy to get rid of him. Mary and her friend took Ohio to Mary's house, where they clipped his filthy coat. What happened after the dog's fur was trimmed is beyond cool. He got up and danced around her yard! I would love to see such a thing. That particular story had a very happy ending as the dog's personality changed dramatically and he lived a long and happy life.
The stories in Dog Tales are a mixed batch. I liked some better than others. There's a Christian bent to this book, but it's not about Christianity. It's just that the author happens to be a Christian and mentions it when people prayed for their dogs or talked about God when they told their stories. I think this book is probably mostly likely to be enjoyed by dog owners, but I enjoyed reading it. I particularly loved the tale of a dog who saved a little boy from the Indonesian tsunami and a seeing-eye dog that led his owner out of one of the Twin Towers on 9/11. Heroic dog stories are always favorites.
The only thing I disliked about the book was the fact that many owners found what I personally consider bad behavior charming. Some of those dogs sounded to me like they needed to spend time at obedience school. But, I can relate to sometimes letting your pet get away with something he or she shouldn't, merely because a pet's so cute you don't want to stop them. Taking the time to snap Isabel's photo when she was lying in a place that's strictly forbidden (on the piano) is a prime example.
Recommended for pet lovers, particularly those who love dogs. My thanks to the author and Harvest House for the review copy.
And, speaking of dogs . . . my grand-dog is here for a visit! She very kindly brought my son with her. Here's the grand-dog, Peyton: 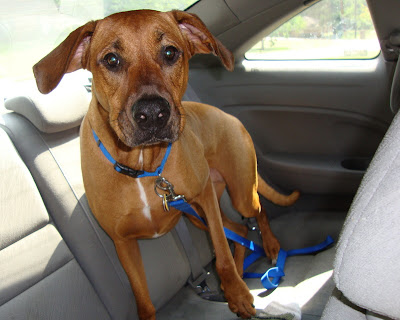 Don't you love those ears? Peyton has had to be boarded because she's an indoor dog and she doesn't like cats, but she's a very friendly, lovable dog and we had fun with her before she went to be boarded with our local vet.
©2011 Nancy Horner. All rights reserved. If you are reading this post at a site other than Bookfoolery and Babble or its RSS feed, you are reading a stolen feed. Email bookfoolery@gmail.com for written permission to reproduce text or photos.
Posted by Bookfool at 7:45 AM