Reading update and some other nonsense

This is going to be one of those rambling posts because I'm in kind of a bummery mood. I think the heat is getting to me. We'll start with the cuteness and move on to reading. This was so wrong of me. The cats are not allowed on the piano, lest their little claws inadvertently scratch the fine wood and my mother return to haunt me, but Isabel looked so cute that I had to snap some photos before making her get down: 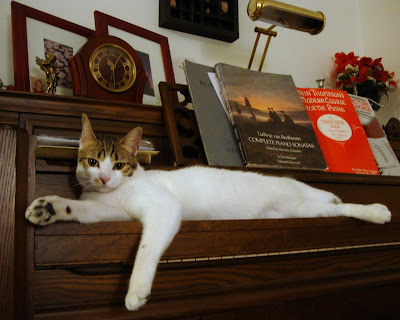 My mother paid for this piano by working as an Avon rep, way back in the Seventies. I used to go along with her for her orders and deliveries, now and then, and although I was small I recall my favorite of her customers was the one with the talking parrot.
Reading update:
I woke up at 5AM on Saturday morning (not by choice -- I'd already stayed up rather a bit later than I should have) and finished reading Simon Van Booy's book, Everything Beautiful Began After. Be patient with me. It's so compelling and such a great story that even though I had the urge to mark practically every other line, I was too immersed to bother. So, I'm going to reread it -- probably next week -- before I review.
But, a few words about Everything Beautiful Began After: It seems to be a love triangle, at first, and it begins a little slowly. Apart from the beauty of his writing, you may even be tempted to think it's not going to be anything special. And, then Simon yanks the rug out from you and turns the story on its head. Suddenly, what you thought was a love triangle becomes a story of grief and hope. It's almost a tapestry -- about love and death and friendship, the fleeting nature of life and how much every single moment counts. Everything Beautiful Began After is awe-inspiring, uplifting, authentic, hopeful, beautiful. It's everything I hoped Simon's first novel would be. Prepare to have your heart broken and then put back together with sparkles and rainbows. Everything Beautiful Began After is a book you simply must read.
Onward . . .
After I closed Simon's book, I gave myself a day to ponder and then decided there was absolutely no way any book could hold a candle to EBBA, so I chose something so completely opposite and fast-paced that I wouldn't end up constantly comparing. My next read was a YA sci-fi, Gone by Michael Grant. In Gone, there are disappearing adults, a strange dome-like enclosure over town, talking coyotes and other strange animal mutations, kids with special powers. It's a little bit Stephen King, a little bit William Golding. The way the children react to the absence of adults hints at Lord of the Flies and, of course, you can't help thinking about King's Under the Dome, although I haven't yet gotten around to reading Under the Dome and, therefore, can't compare.
I finished Gone, last night, and I have a copy of the next book in the series but obligations will keep me from reading it for a while. Instead, I've moved on to a tour book, Face to Face with God by Jim Maxim, and Shadow of a Quarter Moon by Eileen Clymer Schwhab. I'll add both to my sidebar in a bit.
Just walked in the door:
Hunting Unicorns by Bella Pollen - I loved The Summer of the Bear so much that I promptly ordered another of her books. I won't get to it for a while, but that's only if I behave myself. It's very tempting.
My sidebar has just continued to become more intimidating, so I'm going to attempt to start tackling reviews in whatever manner I can, this week. Hopefully, my exercise class won't hit me quite as hard as it did last week, but I will tell you this . . . Two of the girls in my class just finished "Boot Camp," another exercise regime that's known to be quite tough. They told me the class we're attending,"The Next Level," is harder. Goodness.
Might as well end with a photo from our vacation. This picture was taken on our trip west to Exmoor: 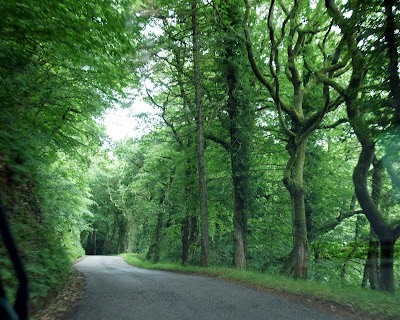 We had the option of paying a couple pounds to take a scenic byway or taking a free road. We chose the scenic byway. At times you could see thousand-foot plummets to the sea, at other times it appeared that Robin Hood was likely to come bounding out of the forest. Definitely a detour worth taking, but not for the faint of heart.
©2011 Nancy Horner. All rights reserved. If you are reading this post at a site other thanBookfoolery and Babble or its RSS feed, you are reading a stolen feed. Emailbookfoolery@gmail.com for written permission to reproduce text or photos.
Posted by Bookfool at 11:56 AM