It's kind of a lazy Sunday, here. I made the mistake of reading a few pages of One Second After, a post-apocalyptic novel by William R. Forstchen, when it arrived in the mail from PBS, yesterday. Couldn't put it down. I just finished reading it, early this afternoon. The apocalypse, as it were, is a result of EMP (Electromagnetic Pulse) caused by the detonation of nuclear bombs high in the atmosphere above the U.S. EMP causes electronics to short out unless they're "hardened" in advance, so the entire United States loses electricity, cell and land-line phone service, cars and planes cease to function and crash or roll to a stop, medical equipment and even back-up generators fail, etc.
I thought the idea was great but the execution was disappointing. One Second After simply was not a well-written book. Many of the adult characters peppered their dialogue with swear words -- and they all used them in the same manner. So, they didn't necessarily sound distinctive. There were also some major grammatical errors which, at first, I thought were an attempt at portraying a particular dialect. But, those errors were consistent across characters. Specifically, the author had his characters saying "would of" rather than "would have" or "would've". Boy, was that irritating.
Still, One Second After was interesting for the perspective and I always enjoy reading post-apocalyptic books because they're thought-provoking. Everyone who writes about a world after an apocalypse chooses a different focus and Forstchen examined things I might not have considered, such as how quickly many of our pharmaceutically-dependent population would die or go nuts, now that so many people are kept artificially healthy -- both physically and mentally -- with medication. I thought that was rather fascinating. And, the whole EMP concept? It's apparently feasible and certainly terrifying. It makes you want to read up on survival skills, how to successfully live an old-fashioned, pre-technology lifestyle and forage for food, etc.
Not a great book, not awful. I was surprised to find that the author has published 40 books; One Second After certainly could have used a lot more tightening. I'm not going to write a formal review -- this is it, kids. 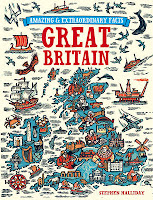 Otherwise, I haven't made much progress on any of the books in my sidebar. I'm about 2/3 of the way through Amazing & Extraordinary Facts: Great Britain and enjoying it immensely. It's one of those books that you read in short bites so it may take me another week or so to finish, but I feel like I've learned a lot of interesting little tidbits. I got a kick out of the fact that baked beans were originally brought to Great Britain by Fortnum & Mason as an exotic (and overpriced) American import. Americans will probably laugh at the idea of anything by Heinz being billed as "exotic".
I started The Help and was totally in love by page

3, but haven't progressed past the first chapter in spite of that. Hopefully, I'll get back to that, soon. It's one of those books that I've avoided because of the hype, so I was really pleased when I started reading and found out it is, in fact, a very special kind of storytelling and not just another book set in the Deep South. I'm really not a big fan of Southern Lit, simply because I don't consider reading about the area in which I live escapist enough and I am definitely into escapism. But, I know already that I'm going to love The Help because of the writing and the genuine Southerness.
The Beekeeper's Lament is another book I'm reading rather slowly and finding fascinating. I knew we had a big die-off of European honeybees, a while back (the book says there was a big die-off in 2005, but there were previous bee plagues of unknown origin and I thought the big die-off was earlier; I do remember a year without

bees). I thought they were rebounding, so it really shocked me to find out that there are no longer any naturally-existing European honeybees in the continental United States. All the remaining bees are kept by beekeepers.
Really? That is kind of horrifying. At this point, our food supply is largely reliant upon beekeepers who truck their bees from farm to farm in order to help farmers with pollination. But, they still have large, mysterious die-offs that occur on a regular basis with no explanation. Imagine what would happen if we no longer had bees around at all. Scary.
Agonizing Love just arrived a few days ago and it's another one of those 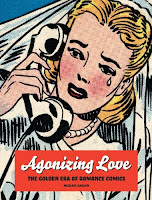 books that I made the mistake of immediately opening. It's a book about romance comics, a type of comic books that were only popular for a handful of years. There's not all that much text but the author makes it clear that the book is more a celebration of romance comics and a sampling of them than a definitive text. In other words, you get a fun peek into a really dramatic style of old-fashioned graphic storytelling along with a little description by the author. Agonizing Love is a bit of a hoot. I'll tell you more about it when I finish.
Other books besides Agonizing Love and One Second After that have arrived, recently:
In the Heat of the Bite by Lydia Dare - from my friend, Melissa
Pillow Talk by Freya North - from Sourcebooks for a book chat
Jamie Durie's The Outdoor Room - from HarperCollins for review
That's all I can think of to chat about, so here's another London photo. On one brilliant, sunny day when my feet were weary, I sat on the little stretch of grass in front of the National Gallery at Trafalgar Square, eating a cheese & onion sandwich and watching the crowd while husband dashed off to fetch theatre tickets to Les Miserables. I was a little envious of the juicy strawberries those fellows in front of me thought to buy. Tired bodies love fruit. 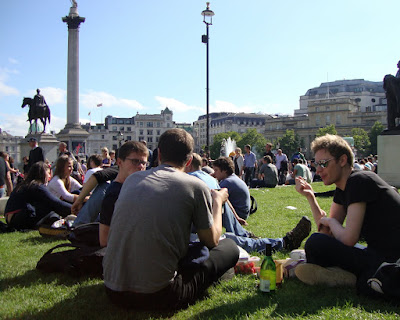 ©2011 Nancy Horner. All rights reserved. If you are reading this post at a site other than Bookfoolery and Babble or its RSS feed, you are reading a stolen feed. Email bookfoolery@gmail.com for written permission to reproduce text or photos.
Posted by Bookfool at 4:49 PM