Recent Arrivals and some other inane jabber

I underestimated just how tired I was from our vacation and spent most of yesterday being a complete and total bum. So, today you get a hodge-podge including a photo of most of the books that arrived while I was gone and the purchase previously not shown (there weren't many arrivals - and you already know about Simon's book, which I will likely talk about so much that it'll make your head spin).
Top to bottom:

God Gave Us You by Lisa Tawn Bergren from Waterbrook for tour
The Beekeeper's Lament by Hannah Nordhaus from HarperCollins for review
The Wild Life of Our Bodies by Rob Dunn from HarperCollins ditto
The Lantern by Deborah Lawrenson - Double ditto
And, the spine of Churchill by Celia Sandys, which I purchased at the Imperial War Museum
Not pictured is Everything Beautiful Began After by Simon Van Booy, which is beside my bed.
I had to photograph one silly London purchase before opening it: 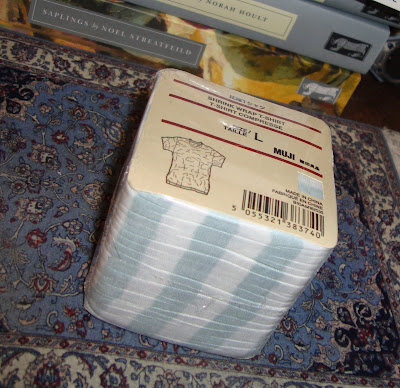 This is a t-shirt compressed into a cube approximately 2" x 2" on each side, which we happened across at Selfridges. I bought a little dress in London that I think the shirt will go under nicely. I don't travel enough to save the t-shirt in compressed form for future trips, otherwise I'd leave it as is, although I do carry an emergency outfit in case luggage goes astray.
And, I'm thinking you might like to see how the kitties are getting along: 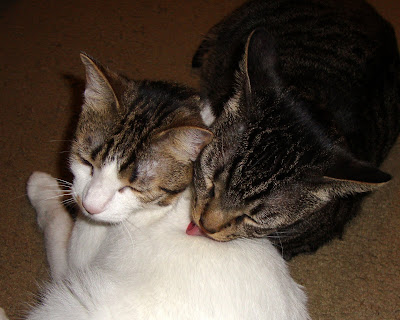 Very well! Apart from one little tiff over who got to nap on top of the IKEAs, Fiona and Isabel have been really sweet together. Kiddo was home to care for them, while we were away, so they were happy and relaxed when we arrived home. They came running to greet us as we walked in the door and I've had fun playing bird-on-a-stick and rattle ball games with Izzy, laser chase with Fi. Since Kiddo was quite busy with work and school, I assume the girls were forced to rely on each other for companionship in a way they normally are not.
A little more about England. To soak up a little bit of literary London, we went to Keats House at Hampstead Heath on Simon's advice. There was a poetry event due to begin later in the afternoon and I'm sad to have missed that due to time constraints. Although I'm not familiar with the poet apparently in charge, Simon Mole, I do plan to look up his work. He was walking around and lounged on the lawn, eating his lunch, near us. I didn't realize he was noteworthy until I saw a life-sized poster of him in one of the upstairs rooms. 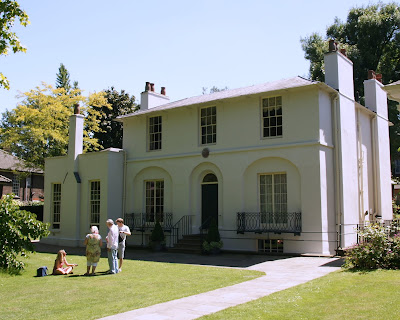 Keats House hosts occasional poetry events. If we lived nearby, I'd definitely purchase a membership and return as often as possible! Visiting his home has piqued my interest in John Keats. I loved reading the bits of poetry and excerpts from letters that were on laminated cards for visitors to read. He was quite the romantic.
And, here is one of my favorite moments from our walk around Hampstead Heath, which started out with two people shouting, "No Betty, no Betty, no Betty, NO!!" and was followed by a splash: 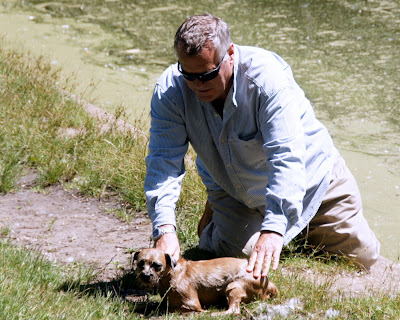 Poor Betty thought she wanted to go for a swim. She had regrets. Her human had to fish her out of the pond. Then, she ran around in circles, shaking herself off, much to the amusement of passing sun worshippers. It was a beautiful and rather hot day in London. I got a touch sunburnt, actually. Very surprising.
I've got a lot of tidying to do, since Kiddo seems to have really, really enjoyed spreading out, being King of the House, while we were gone. Hopefully, I'll be able to do a little blog-hopping, soon. I may have also overestimated how much time I'll have to post, but we shall see. Hope everyone's enjoying the weekend!
©2011 Nancy Horner. All rights reserved. If you are reading this post at a site other than Bookfoolery and Babble or its RSS feed, you are reading a stolen feed. Email bookfoolery@gmail.com for written permission to reproduce text or photos.
Posted by Bookfool at 1:14 PM