After the Quake by Haruki Murakami 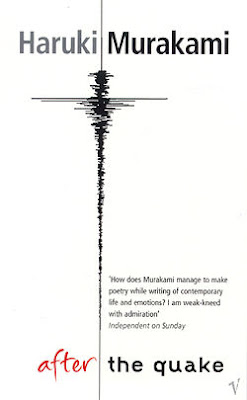 From the cover (again - a really well-written cover blurb I must defer to):
The economy was booming. People had more money than they knew what to do with. And then the earthquake struck. For the characters in After the Quake, the Kobe earthquake is an echo from a past they buried long ago. Satsuki has spent thirty years hating one man: a lover who destroyed her chances of having children. Did her desire for revenge cause the earthquake? Junpei's estranged parents live in Kobe. Should he contact them? Miyake left his family in Kobe to make midnight bonfires on a beach hundreds of miles away. Four-year-old Sala has nightmares that the Earthquake Man is trying to stuff her inside a little box. Katagiri returns home to find a giant frog in his apartment, on a mission to save Tokyo from a massive burrowing worm. 'When he gets angry, he causes earthquakes,' says Frog. 'And right now he is very, very angry.'
This [...] collection of stories, from one of the world's greatest living writers, dissects the violence beneath the surface of modern Japan.
I've only read part of The Wind-Up Bird Chronicle, prior to purchasing After the Quake (which, I should add, I am capitalizing in spite of the lack of capitalization of the title in that cover blurb, above). I didn't finish the book for reasons I don't recall, but I was very, very impressed with his writing and I've pretty much been collecting Murikami's books, ever since. After the Quake and Underground are two that I haven't been able to find easily, so when I saw them in a little store I like in London, I snapped them up. Husband just rolled his eyes.
I read the stories in After the Quake after finishing My Dear I Wanted to Tell You (I promise I'll review My Dear, soon - it is yet another story that really swept me away). There is something tremendously quirky yet real about Haruki Murikami's stories. He has a tendency to make you wonder, "Where the heck is he taking me?" and then he suddenly has his characters do something so bizarre, just as you think you may possibly have it figured out, that you just have to keep reading. That's one reason I'm a little perplexed that I didn't actually finish reading The Wind-Up Bird Chronicle . . . which, by the way, my eldest has since carried away.
I had a couple favorite stories in After the Quake, of course, although I enjoyed the experience of all of them, in general. "Landscape with Flatiron" is probably my absolute favorite. Junko has been living a dead-end life with her boyfriend, Keisuke. Her friend Miyake calls her up to ask if she and Keisuke would like to come join him on the beach as he builds a bonfire. Miyake has a thing for bonfires; he has learned how to tell when the tide will bring in lots of driftwood and with the driftwood he collects, he uses the special technique he's developed to keep the fire going a long time without burning out.
Keisuke is a jerk. He makes a lot of wisecracks about sex and picks on Miyake's refusal to share his history, which Junko eventually draws out of him after Keisuke leaves. Keisuke's departure leaves Junko and Miyake to share their deepest, darkest secrets. Miyake tells about his real home and his recurring nightmare. Junko talks about her emptiness and her favorite short story.
If you know your Jack London -- and most people have probably read the story that's referred to (but not by name) -- then you'll recognize the parallel when you read it, but I don't want to give any details away. Suffice it to say, "Landscape with Flatiron" is a very touching, skillfully rendered parallel to a Jack London short story. It is sad but beautiful.
I don't think I'll rattle on about the other stories, but After the Quake is a slender book at 132 pages containing 6 stories that are all unique in a way that makes your brain curdle just a bit. What an imagination he has! "Super-Frog Saves Tokyo" is particularly mind-bending.
The bottom line:
A unique set of short stories by one of the world's most imaginative, possibly somewhat twisted, minds. Definitely recommended, but I'd say it's about a PG-13 because of all the sexual references. Can't remember if there's anything graphic, although one fellow ends up in bed with a virtual stranger. I'm definitely looking forward to reading more by Murikami. 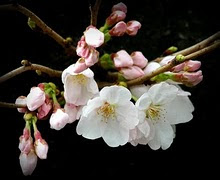 I don't know how many books I plan to read, but this was the first book I've completed for Bellezza's Japanese Literature Challenge 5. I'll definitely be reading more. I just don't know what and when. Fortunately, this challenge is a long one, from June of 2011 to January of 2012.
©2011 Nancy Horner. All rights reserved. If you are reading this post at a site other than Bookfoolery and Babble or its RSS feed, you are reading a stolen feed. Email bookfoolery@gmail.com for written permission to reproduce text or photos.
Posted by Bookfool at 3:36 PM