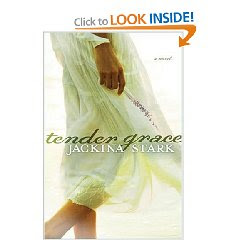 Over a year after the sudden death of her husband, Audrey Eaton is still in mourning and deeply depressed, desperately in need of change and hope. To shake herself from depression and in search of healing Audrey decides to take a road trip and packs her husband's Bible on impulse.

Tender Grace is written as a set of journal entries typed on Audrey's computer at the end of each day. During her time on the road, she makes new friends and visits places that either her husband traveled without her or they planned to visit together. In the evening, she reads from the chapter of John, primarily because her husband's Bible was opened to John and still on his lap when he suffered a major heart attack.

Through her travels, hardships on the road (including an armed robbery and a flat tire), new and old friendships, and her readings in John, Audrey eventually realizes she is once again content with her life.

This was an emotional read. At the beginning of the book, Audrey is still very depressed and lonely, in spite of the fact that her grown children and her grandkids live within easy driving distance. I become so emotionally involved when I read (especially if a book is written well enough) that depressed characters can seriously get me down and are difficult to read about at length, so I was really happy when things improved for her. Audrey's transformation is gradual and not forced.

The whole road trip concept actually threw me because I didn't bother with the cover blurb (sometimes they can be misleading or contain spoilers). However, once I got used to the notion of a woman traveling to rediscover hope I found it intriguing and it made sense to me that she needed to walk away from a house full of memories in order to heal. After my father's death, I avoided going home for years -- except during holidays and our annual summer trip -- simply because of the overwhelming absence of his noisy chatter, door-banging, and his TV shows. I can easily imagine how the emptiness of a house that formerly contained a companion, his noises and the comfort of conversation could become unbearable. The author portrayed that feeling painfully well.

Near the beginning of the book Audrey traveled to Tulsa and Oklahoma City, where she visited a few places that are familiar to me -- that was my favorite part of the book. The passages she read in her Bible seemed to fit her needs well and I enjoyed reading about the places she went and the people she met, as well as what she learned from them, even if a few of those strangers were perhaps a bit too friendly and it stretched believability that she was able to keep in touch with not one but several.

In general, Tender Grace is nicely written and slow-paced. I didn't find it gripping or overly engrossing, but at the same time it was a bit of a comfort read. It was particularly enjoyable observing the sights through the eyes of this fictional character and I was rooting for her to rediscover her joy in life. She may have started out quite depressed, but Audrey made an effort to think positive thoughts and, although occasionally a little sarcastic, was a character I cared about enough to root for her recovery.