I haven't read the book you see, at left. I just thought the title was fitting. Where do the days go? I can't believe it's already the 23rd of May and I'm just now getting around to posting a summary of my April reads. I had a slightly lesser month because of our week of vacation in April, but I still think it was a good one. Links lead to my reviews, if applicable.

1. SLOB by Ellen Kennedy (YA/Ages 9-12) - A brilliant, overweight boy tries to unravel the mystery of who has stolen his cookies whilst working on an invention that he hopes will help him see into the past. Funny, poignant, great characters -- just an all-around terrific book.

2. The King with Horse's Ears by Batt Burns; Illus. by Igor Oleynikov (CH) - Irish folktales with stunning illustrations. My favorite is not a traditional tale, but a new one written by the author.

3. How I Got to be Whoever it is I Am by Charles Grodin (NF) - The actor/journalist talks about his youth and how he became an actor then segued into journalistic presentation.

4. Go Back and Be Happy by Julie Papievis (NF) - The memoir of a woman who claims to have died & gone to heaven (briefly), where she met her grandmothers and was told, "Go back and be happy." She then emerged from a coma. Doctors had expected her to die of the severe brain stem injury she received in an automobile accident.

5. Real Solutions for Busy Moms by Kathy Ireland (NF) - Just what it sounds like, practical solutions for making life as a mother more tolerable. Some of the book is written in question/answer format.

6. Spiced by Dalia Jergensen (NF) - (link leads to a mini review below that of Real Solutions) -Wow, I read a lot of non-fiction in April, didn't I? Another memoir, this time from the kitchen as Dalia describes how she turned her love of cooking into a career as a pastry chef. I thought this was really a fun read, apart from the bits about her sex life.

7. The Lost Hours by Karen White - A horse-riding accident left Piper in pain and took away her greatest joy but her grandfather's death, a charm & some scrapbook pages send Piper on a search that will change how she views her past and future.

8. So Not Happening by Jenny B. Jones (YA) - When her mother remarries and her father decides he's not the best parent for her to live with, Bella goes from privileged lifestyle in the big city to life on a farm in rural Oklahoma. This book actually had me laughing out loud and became an instant favorite. I can't wait to read the next in this new series.

9. So Long Status Quo by Susy Flory (NF) - And, I'm not even done listing the memoirs. Part memoir, part inspirational, the story of how one woman decided to get up off the couch and start making a difference.

10. The Blood of Lambs by Kamal Saleem (NF) - Seriously, I had no idea I read so many memoirs in April. The Blood of Lambs was my favorite because it's beautifully written & gripping. Saleem tells about his childhood in Lebanon and how he became a terrorist for the PLO at 7 years of age.

11. Living Fossils - Evolution: The Grand Experiment, Vol. 2 by Dr. Carl Werner (NF) - I haven't reviewed this book, yet, but it's scheduled for review the first week of June. Dr. Verner was challenged to prove the theory of evolution, while still in medical school (he's an ER doctor). This book tells about the challenge and how he went about trying to prove evolution by disproving it -- and why he chose that method. I just read the first book and will review it at the same time.

12. Fire Me by Libby Malin - Anne is tired of her job and on the verge of resigning when her boss announces a layoff and informs everyone that the person who loses his or her job will receive an attractive severance package. Slapstick chick lit ensues as Anne tries to get herself fired.

13. Stop the Traffik by Steve Chalke (NF) - A shocking expose about the widespread problem of human trafficking. Interesting side note: Chocolate producers didn't like what I had to say about the slave boys working on cocoa farms in that region, along with my assertion that I will only buy Fair Trade chocolate (they haven't changed my mind).

That's it! Just 13 books finished in April. Two years ago, that would have been a record-breaker. Not so, now, but I'm satisfied.

Just to pretty up this post a bit, a "nom, nom" photo from Costa Rica: 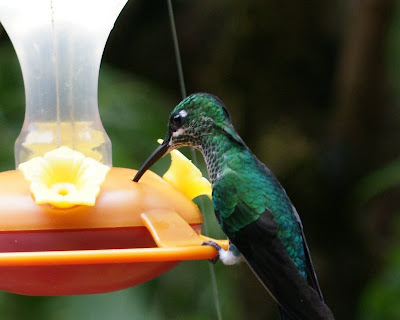