The Nonesuch by Georgette Heyer 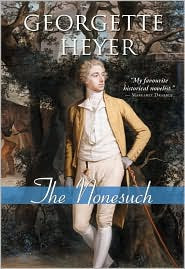 What led you to pick up this book? I read and reviewed my first Georgette Heyer book, Cotillion, for Estella's Revenge last year. It was a hard read because I'd never encountered that level of Regency lingo, but it was a great story and I've planned to read more. When Danielle at Sourcebooks offered up several titles for review, I snatched The Nonesuch (and a couple of others, which I'll get to in the coming weeks or months).

Describe the plot without giving anything away.

Ancilla Trent is in her late twenties and unlikely ever to marry. As the hired chaperone of strikingly beautiful young Tiffany Wield, she's got her work cut out for her. Tiffany has no sense of tact and is tremendously selfish, but thanks to her beauty she usually has a bevy of young admirers to toy with. When she goes too far and humiliation becomes her likely fate, she runs away to London. Will Ancilla be able to stop her?

Sir Waldo Hawkridge is wealthy, philanthropic and stylish. He's also a confirmed bachelor. When he inherits a run-down estate and travels to Yorkshire with his cousin, Lord Julian Lindeth, to supervise the repairs to Broom Hall, it's only natural that such dashing men should be invited into the social whirl. Sir Waldo plans to turn Broom Hall into an orphanage and leave as soon as he's able. But, he quickly finds himself falling for Ancilla Trent. Ancilla knows she's not in Sir Waldo's class and a romance would be scandalous. Is he playing games with her, or is it possible that such a charming man returns her affections?

Describe a favorite scene. Honestly, I loved absolutely every scene in the book. So much happens that I think I'd have trouble singling out any particular scene, but I do love it when Julian offers to teach Patience Chartley (the rector's daughter) the waltz. The waltz is all the rage in London, but in the country people are iffy about it and Julian is trying to explain that the dance is harmless to Patience's mother when this happens:

The Rector, coming into the room and learning what was the subject under discussion, said that since the world began each generation had condemned the manners and customs of the next.

What did you think about the characters? Georgette Heyer had a knack for creating beautifully three-dimensional characters. The Nonesuch (Sir Waldo) and Ancilla Trent are charming and witty, and there are some nosy, haughty women and gallant young men. Sir Waldo's cousin Lawrence eventually shows up and he's suitably paired with the uncontrollable Tiffany, for a time. I'd say the characterization is darn near perfect, although I had a little trouble distinguishing some of the secondary characters, for a time, because there are so many.

What did you like most about the book? I love the witty dialogue, the characters, the storyline, the setting, the action. A great deal happens in this book. It was a tremendously fun, light-hearted read.

Was there anything you didn't like about the book? That Regency lingo is rough. Fortunately, there are some helpful sites online (I printed out some of the slang and expressions and kept them with me when I read) and eventually you become accustomed to the mode of speech. Heyer is a little like Shakespeare, in that way. Once you become involved and get into the rhythm and style, most everything makes sense in context -- even if you're too lazy to get up and look up a few expressions online (yeah, sometimes I didn't bother). The ending is also a little odd, but nothing to complain about.

Recommended? Absolutely. I've enjoyed both of the Heyer books I read so much that I'd love to read everything she's ever written, at this point. This is a very romantic story, but so much happens that I'd encourage people who just like a good story to snatch up this book and give Heyer a try.

Cover thoughts: I like the cover. I don't love the cover, but I really like it. I find it a little difficult imagining the way people dressed in that time period without a little visual help and I occasionally closed the book to remind myself of how Sir Waldo was probably dressed.

Coming up: I think I've read about 5 or 6 other books that I haven't reviewed. Since most of them are from my personal collection, I'm planning to just dash off a few mini reviews, this week.