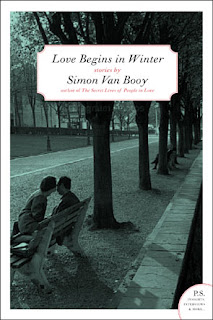 Wait! Don't skip this review just because you don't like short stories! Please read on. Take in a few quotes and see if I can't change your mind because you really need to buy this book.

Children are the closest we are to wisdom, and they become adults the moment that final drop of everything mysterious is strained from them. I think it happens quietly to every one of us -- like crossing a state line when you're asleep.

"Every morning can be the beginning of your life -- you have thousands of lives, but each is only a day long."

-- from "The Missing Statues"

"This country is nothing but rain and songs," his father once said in his Romany accent.

A young Walter had asked if that was good.
"Ay, it's grand, Walter -- because every song is a shadow to the memory it follows around, and rain touches a city all at once with its thousand small hands."
--from "The Coming and Going of Strangers"

He remembered all those mornings out in the field beside his caravan, watching storms move across the fields below. Eyes glued to the sky until a fork of lightning hit the earth; wind ripping trees from soggy riverbanks; an early morning blizzard like pillows ripped open. Walter suddenly felt that such things were part of his very being. And that for his entire life, the countryside he'd grown up in was a form of self-portrait.

--from "The Coming and Going of Strangers"

I fell in love with Simon Van Booy's writing in 2007, when The Secret Lives of People in Love was offered to Estella's Revenge writers for review and I waved my little hand (my review of The Secret Lives of People in love -- note that the word "compendium" was substituted for "anthology" by the editor; I believe "collection" is actually the correct descriptive term and we were both wrong). I had absolutely no idea what I was getting into. Simon's writing is utterly addictive. I nearly beat my copy of Secret Lives to death and probably should have bought stock in Post-its. I've read all of the stories at least three times and sometimes I just walk to the shelf, pull out the book and flip open at random.

Just a couple of months after reading Secret Lives, I had the

privilege of interviewing Simon when I was in Ann Arbor, Michigan. Really, we just chattered a lot and I gleaned information from our conversation. I'll reprint the interview at Bookfoolery, soon; it was written for Estella's Revenge and I didn't cross-post, at the time, although you can read my interview with Simon Van Booy here, if you're feeling impatient. Simon actually was heading from Detroit to somewhere in Ohio and drove out of his way to meet up with me. He's that kind of guy.

We've kept in touch and Simon sent me an ARC of Love Begins in Winter, earlier this year. I gobbled it up way ahead of its release and just reread it, last week. I don't think I'm ever going to have any trouble at all with that promise I made to myself to read absolutely everything the man ever writes. In fact, I wish Harper Perennial would shove his books through the press a little bit faster. Love Begins in Winter is an anthology containing five of Simon's short stories, in which he once again mines the depths of the human heart.

- The story from which the anthology derives its name, "Love Begins in Winter" weaves together the tales of two people who have spent their lives clinging to private grief but find love when they sense each other's stories through the mingling of their tokens of remembrance.

He looked surprised and I wasn't sure what to do. My hand began to shake and he reached for it. I let him. With his other hand, he took from his pocket a handful of acorns and put them in my palm.

From my pocket I took a large stone and set it squarely in his open hand. If there is such a thing as marriage, it takes place long before the ceremony: in a car on the way to the airport; or as a gray bedroom fills with dawn, one lover watching the other; or as two strangers stand together in the rain with no bus in sight, arms weighed down with shopping bags. You don't know then. But later you realize -- that was the moment.

And always without words.

Language is like looking at a map of somewhere. Love is living there and surviving on the land.

- A slightly darker story in which the heroine shows her love in a most unusual and painful way, by biting the object of her affection.

- A man notices a statue missing from St. Peter's Square and is reminded of a time when the compassion of a stranger turned a dreadful childhood experience into a moment of transformative beauty and hope. "The Missing Statues" was featured at Fifty-Two Stories with Cal Morgan. Dash over and read it if you're unsure about buying the book. It's an excellent example of Simon's style.

The Coming and Going of Strangers

- An Irish gypsy jumps off a cliff to save a child who has fallen and is rewarded for the heroic deed that eventually will cripple him. Years later, his son develops a crush on an orphan from Canada. Throughout this story, strangers touch each other's lives and hearts.

The City of Windy Trees

- A very lonely man finds it's still possible to fill gaping holes in his life when he receives a letter containing a photograph of a young girl.

When I opened Love Begins in Winter for a second reading, I had a rather funny experience. I read the first story (the title story) and thought to myself, "Oh, yes, this was one of my favorites!" As I read through the book, I realized that I actually had four favorites. Only one didn't thrill the socks off me. Simon's writing is unflinchingly honest, an exploration of the flaws of humans and the love that binds them together. Unlike a lot of readers, I enjoy short stories but am well aware that very few people know how to do them right. Simon's stories never leave you dangling or drag on long after they should end. They vary in length and each is paced with perfection.

Extra material in the book includes a "Meet the Author" section as well as "How to Find a Story" and "What I Do When I'm Not Writing Books," all written by Simon and each offering some additional insight into the stories in Love Begins in Winter and The Secret Lives of People in Love.

I was a little flabbergasted when Chris of Stuff as Dreams Are Made On informed me that my name is in the acknowledgments (Thank you, Simon!). If you still hate short stories and don't want to read the book, I can give you another excuse to buy it. You can say, "Hey, I know this chick in the acknowledgments!" There you go.

Simon is in the Seattle area today and tomorrow (the 21st and 22nd of May). You can find out if he will be visiting a city near you by checking Simon's tour schedule. Tell him Bookfool sent you!

(loved it!). More on that, later, I hope. I do have a rather oppressive-looking calendar.
Off to pick up my teenager from school. He has suddenly become disinterested in driving himself to school in the morning.
Happy Trails!
Posted by Bookfool at 12:54 PM