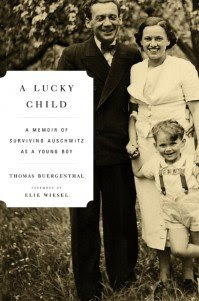 The winners of my drawing for 5 copies of A Lucky Child are:

Congratulations!! I'll get in touch with you to acquire your addresses.

Want to know the titles of memoirs suggested by entrants? There were quite a few. Some folks were unsure whether their favorites qualified as memoirs and I removed a couple that I knew for sure were not, but the list was humongous. There were quite a few very enthusiastic responses. Thanks for sharing your favorite memoir titles! Here they are:

1. The Glass Castle - Jeanette Walls (this one was mentioned more than any other title)
2. A Walk in the Woods - Bill Bryson (mentioned at least twice; I liked it, also)
3. Catch Me If You Can - Frank Abagnale
4. Fun Home: A Family Tragicomic - Alison Bechdel
5. Walking Through Walls - Philip Smith
6. All Over But the Shoutin' - Rick Bragg
7. 50 Acres and a Poodle - Jeanne Laskas (this was mentioned at least twice)
8. Wait till Next Year - Doris Kearns Goodwin
9. Dispatches from the Edge - Anderson Cooper (another one I'll noisily second)
10. Don't Let's Go to the Dogs Tonight - Alexandra Fuller
11. A Year in Provence - Peter Mayle (one thumbs up, one down)
12. The Non-Runner's Marathon Guide for Women - Dawn Dais
13. How Starbucks Saved My Life - Michael Gates Gill (I liked this one, too)
14. Auncun de nous ne reviendra (None of us will return) - Charlotte Delbo
15. Confessions of a Counterfeit Farmgirl - Susan McCorkindale
16. Eat, Pray, Love - Elizabeth Gilbert
17. I Was Told There'd Be Cake - S. Crossley
18. The Last Tsar: The Life and Death of Nicholas II - Edvard Radzinsky (bio, not memoir)
19. Hope's Boy - Andrew Bridge
20. Marley and Me - John Grogan
21. Angela's Ashes and
22. Teacher Man, both by Frank McCourt
23. Hana's Suitcase - Karen Levine
24. I Am the Central Park Jogger - Trisha Meili (just read this one and I thought it was good, too)
25. A Heartbreaking Work of Staggering Genius - Dave Eggers
26. Up Till Now - William Shatner
27. Here's the Story - Maureen McCormick
28. Night - Elie Weisel (mentioned numerous times)
29. Clear Springs - Bobbie Ann Mason
30. Lucky - Alice Sebold
31. A Long Way Gone: Memoirs of a Boy Soldier - Ishmael Beah (mentioned at least twice)
32. The Diary of Anne Frank
33. A Lotus Grows in the Mud - Goldie Hawn
34. I Feel Bad About My Neck and
35. Heartburn, both by Nora Ephron
36. West with the Night - Beryl Markham
37. I'm With the Band - Pamela des Barres
38. 501 Minutes to Christ - Poe Ballantine
39. The Hiding Place - Corrie Ten Boom (mentioned more than once and I agree, this is an old favorite)
40. One Child - Torey Hayden
41. Reading Lolita in Tehran - Azar Nafisi
42. A Girl Named Zippy - Haven Kimmel (yep, I loved that one, too)
43. The Life and Times of the Thunderbolt Kid - Bill Bryson
44. Comfort - Ann Hood
45. Memoirs - Pablo Neruda
46. I Know Why the Caged Bird Sings - Maya Angelou
47. Couplehood - Paul Reiser
48. On the Road - Charles Kuralt
49. Running with Scissors - Augusten Burroughs