No Touch Monkey! by Ayun Halliday 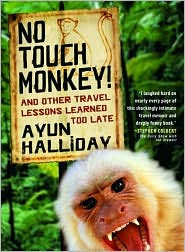 "My dear, do you have any idea why there is a need for volunteers [at the Cambodian polls]?" the Italian asked, patting my hand with a condescending, perfectly manicured paw. Rather than lose face by admitting that I didn't, I treated him to the smirking, opaque shrug I, like so many other young Americans, had perfected in junior high school. "It's because the United Nations people who were supposed to be supervising the elections fled for their lives," he continued, egged on by my insolence.

"Yes, there have been shootings at the polling places," the monk confirmed. "It is not safe."

"When I was in Spain, I had to pretend to be a can opener," I said. "It was the only way to make this man who ran the refreshment stand understand what I wanted.

"How do you act like a can opener?" Kosiya asked.

I demonstrated, opening my mouth wide and pretending to puncture a tin lid with my front teeth. Raising my hands to chin level, I spun an invisible can, growling in girlish approximation of a humming motor.

"Why didn't you just do this?" Greg persisted, squeezing imaginary handles together with his left hand, while turning a crank with his right.

When we returned from our expedition, we found that the monkey had left a calling card, perhaps a warning of the kind of misfortune sure to befall anyone foolish enough to tangle with him twice. The mangled upper portion of a flip-flop lay on our doormat, chewed well past the instep. Greg leaned down to pick up his souvenir, cradling it gently like the sacred relic it was. "Look," he intoned, "you can see the teeth."

We examined the ruined shoe whose twin would be discovered later that evening, abandoned in similar condition on the upper roof. I fully believed that the missing part had been eaten. "God," we chimed in unison, "monkeys are so cool."

I'm going to try to keep this brief, but you can see from the quotes that Ayun Halliday's writing is a hoot. No Touch Monkey! is all about Halliday's crazy, dirt-encrusted, low-budget hippie backpacker-chick traveling adventures. I can count the number of places she's gone that I'd want to go without using a single finger or toe (or anything else). But, boy, are her travels fun to read about.

No Touch Monkey! can be a little on the personal side. Ayun doesn't hold back when describing her bout with malaria, intestinal agonies, sore body parts (camel ride, anyone?), close encounters with natives, dirt, stench, yucky food. It's such raucous fun, though, imagining someone else smelling rank as a goat, drinking tap water and regretting it, wearing a ridiculous outfit with a hot pink turban, getting screamed at by a madam . . . and on and on . . . No Touch Monkey! is definitely worth the time. I just loved this book.

Highly recommended. Just be aware that the word "gross" frequently applies. I would call this book a little "adult", but I think if your teenager sneaks it off your nightstand, he'll probably just laugh a great deal and have second thoughts about inhaling, drinking or doing certain things. It probably won't corrupt him. Or her. I could be wrong.
Posted by Bookfool at 4:23 PM