The Non-Runner's Marathon Guide for Women 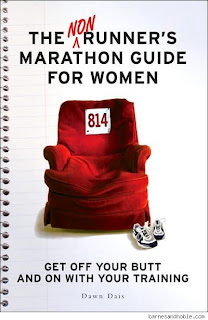 The heel-to-toe method is supposed to absorb some of the shock and allow my knees to stay on my body until at least December. I have yet to figure out a method of absorbing the shock of getting out of bed at 6:30 am on a weekend, though. Any suggestions for remedying that jarring effect would be greatly appreciated.

[Note: The quote above is one of the journal entries interspersed throughout The Non-Runner's Marathon Guide for Women]

My husband and I are doing so-so at marathon training, since neither of us really feels any overwhelming desire to run 26.2 miles, but we both still hope to at least be able to run a half-marathon, at some point. So, when Laura recommended The Non-Runner's Marathon Guide for Women: Get Off Your Butt and On With Your Training, I looked it up. It sounded like my kind of book, I ordered a copy, and, boy, was I right. It's a hoot. My kind of book, definitely.

Dawn Dais decided to run a marathon on a whim, when she received a card in the mail about training to run a marathon with the proceeds going to the American Stroke Association. Dawn's grandfather had suffered a debilitating stroke and died not long before the card arrived. Raising money for the prevention of an illness that touched her personally was her motivation for signing up.

My husband and I were just discussing our motivation, tonight, and he said our goal was, "To get off the couch and stay off." I said, "Yeah, sort of. But, we don't have a couch." He muttered something about semantics and the fat leather chair and other stationary objects upon which to place one's behind and in the end we agreed that the point is that we're spending time together, getting in shape. Plus, someday we'll get our den floor back and buy a couch.

The Non-Runner's Marathon Guide for Women is a nice reference but mostly it's just a really fun, raucous read. Dawn Dais is hilarious. I hope she writes more books. While I don't think everything you need to know is described in detail in this book, that's really beside the point (and she does touch on all the important topics). It's funny, inspiring, funny, helpful, and funny. And, did I mention it's funny? Her sense of humor is sarcastic and sometimes snarky writing irritates me, but it never grated on my nerves. I laughed so much, in fact, that I think I can safely say it's not a book you'll sleep through. The Non-Runner's Guide also a great starting point if you're considering marathon training or you've started and you need a little inspiration.

Dais includes training schedules for a half-marathon and full marathon. I was surprised to find that her schedules are quite different from the schedule we got for our marathon training group. They're much more intense, which is good. I've always thought our weekly workouts were a little on the wimpy side and that it was the lack of intensity during the week that made the Saturday group runs uncomfortably challenging. In fact, I like Dais' schedules so much that I photo-copied them to refer to.

Whether you'd like to run a marathon and need inspiration or just want to read something that will make you laugh, The Non-Runner's Marathon Guide for Women is a great read, highly recommended.