is written entirely in emails, as you see in the example above. I've read a couple of email books -- I think by Meg Cabot -- and loved them. It's surprising how much character development one can create through a series of emails. But, at a massive 665 pages and given the fact that Holly Denham is a fictional character created by a man, I admit that I was a tiny bit skeptical that I'd enjoy it. It took about two pages to lay that skepticism to rest.
Holly's Inbox is miserably, painfully addictive. I started reading it on Wednesday evening and the pages just kept turning. I didn't want to put it down!! Finally, I decided I'd better try to get some sleep and set it aside at about 2:00 am. Well. That didn't work at all. By then, I was so far into the soap opera of Holly's world that I was a wee bit wired. Plus, my husband was in freight-train snoring mode. I ended up giving up on sleep at around 4:00 in the morning and just stayed up, typing and then reading until I reached the end of the story.
At the beginning of the book, Holly is starting a job as a receptionist at a corporate bank. The two receptionists can't be seen chatting, so they email each other. At first, Holly has trouble keeping up and Trisha seems a bit of a snob, but then the two receptionists become fast friends and allies. Meanwhile, Holly deals with uppity bank employees, chats with her wacky friends and dysfunctional family members, and develops a secret romance with one of the upstairs bankers.
A little bit of a mystery brews when a man named Toby begins working at the bank. Holly and Toby have a history, but it's very, very slowly revealed along with the rest of her past and how Holly, who has a decent education and apparently an upper-middle-class background, ended up working as a receptionist.
Holly's Inbox is unbelievably, compulsively readable. It's very much like peeking into someone else's mailbox, but not quite so cryptic as real-life emails can be. It's a well-rounded story, often funny, sometimes poignant. There's a lot of sex talk and sometimes it gets a little rude, but never enough that I was tempted to put the book down. That would be my only complaint with the book. With a sex addict as a character (Holly's friend, Aisha) and an office romance, you have to expect some rude sex talk. Holly herself is a sweet, lovable character -- very much like the heroines in Jill Mansell's books.
4.5/5 - Excellent, nearly impossible to put down, with great characters, loads of laughs and a little scandal.
Thank you those of you who took the time to tell me your preference for numerical ratings!!!
Coming soon: Two new giveaways!!
Many thanks to Jeanne for the Heartfelt Award! I'm also unable to copy and paste the image, Jeanne. The link, above, apparently goes to the originator of the award.
I want this on one of my walls: 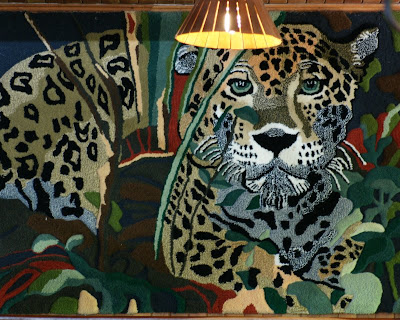 That's a hooked rug, I believe, and it hung behind the reception desk at the hotel in which we stayed in Monteverde, Costa Rica. Isn't it beautiful?