Fire Me by Libby Malin 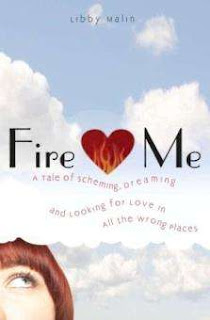 Anne Wyatt is sick of her job and on the verge of a dramatic change. A new job awaits her in California and she will be happy to leave Washington, D.C. and her egotistical boss behind. On the morning that she plans to hand in her resignation, though, the boss calls a meeting announcing that one person will be laid off at the end of the day -- with a severance package. The pink slip will be given based on the day's performance.

Now that she's heard about that tempting severance package, Anne sets out to make a mess of things deliberately, so that she can get fired instead of resigning. But, it's not so easy as it sounds. One of her co-workers also has her eye on the severance package. And, her next-cubicle neighbor has a little bit of a crush on Anne. In order to help her avoid being laid off, he ends up thwarting her every move. Will Anne win the battle of the pink slip or is it even the right decision to leave the company? And, why didn't she realize sooner that Ken is a really great guy?

I'd classify this book as slapstick chick lit, although I hesitate to do so because I think a lot of people frown on chick lit, period. I usually love chick lit. In this case, I found the book so-so. It took two attempts for me to get into it and I think that may have at least partly boiled down to timing. When I first opened the book, my son's workplace had just laid off 1,000 people. It's hard to wrap your head around the idea of trying to get fired when so many people are losing their jobs. But, the timing is certainly not the author's fault and I deliberately worked at setting that little bias aside.

In the end, I actually started to care about Anne and wonder how things were going to turn out. But, I still hated her reasoning for wanting the severance package. Rather than seeing it as a way to help her get set up in her new job, she wanted to take a vacation with the added benefits she would receive. It wasn't till nearly the end that she started to really evaluate herself and her plans, how she had treated people and what she honestly wanted to do with her life.

I really liked the ending, since Anne did come to her senses. To say much more would give too much away, but the storyline is nicely resolved and all the little strands are wrapped up. Libby Malin's website says the book has already been optioned for filming and that doesn't surprise me. As I read the book I kept thinking it would make a good movie.

I'm enjoying absolutely everything I'm reading, right now. I just love it when that happens, don't you? I'm not sure what will be next. My review of The Blood of Lambs has been an angst-ridden, hair-pulling process because I feel like I already said so much about it, but I'll keep working on it and also hope to write up a month-in-review post a little more quickly than I usually do.

Happy May! I can't believe it's already May, can you?
Posted by Bookfool at 12:01 AM