The Wonder Singer by George Rabasa

The Wonder Singer by George Rabasa
Copyright 2009
Unbridled Books - Fiction
322 pages
Author's website
"Take Tosca home. I sing Floria. It may give you a headache the first time you hear it. Keep playing it until it doesn't hurt. Don't sleep, read, eat, or talk through it. You can glance at the libretto. But only at the Italian. It doesn't matter if you don't understand every word. Just sit and listen."

"I haven't heard it."
"Every performance has been documented, reviewed, analyzed, praised, or lambasted in the world press. Get thee to a library."
"We use the web now, Señora. But, that's not the point."
I was measuring life from one letter to the next, holding my breath, skipping heartbeats between letters, the time between them slipping by as if in a restless dream. And, the day the letter from Nolan arrived, well, that was like having the sun shine in the middle of the night.

Lockwood is visibly irritated. Why can't he sit beside Perla? he wonders. It's bad enough that the briefcase keeps getting in the way. "I can't believe you are the protector of morality," he says.

"Oh, my," Orson says with a grin. "Am I getting a whiff of moral superiority from a two-timing husband?"
"Gracias, quierido," Perla laughs, sliding toward Orson.
"Have a drink, Scribbler," Orson says. "You'll feel better."

As Lockwood's house settles into a routine, beyond its doors signs of life become suspect. This is a neighborhood that empties in the daytime. Husbands and wives drive away to their offices; children are packed off to school. Lockwood has noticed that the expression on the faces of adults and kids is equally wan and harried, as if classrooms and cubicles were merely the cells where penance is to be exacted in compensation for the neat houses with their nice lawns and their rooms full of gadgets. The ecstasy of multichannel satellite TV, games of digital thump-'n'-shriek, cosmic roaming through the web of the wide world, all have a proper time. Staying home during the day is a sign of an embarrassing dysfunction--illness, unemployment, bipolarity, plain sloth.

We went on remarkable adventures, were together at at exciting times, forgave each other a multitude of sins. There's no point in leaving the person after so much because you keep on dragging the life you've led wherever you go.

What led you to pick up this book? The Wonder Singer sounded interesting, of course, and Unbridled Books was looking for reviewers, so I held up my little hand and waved. I've always been a willing volunteer when it comes to books.
Describe the plot without giving anything away. Mark Lockwood has made a tolerable income as a freelance writer, authoring the "How to Talk to Your Teen" series, but he's never returned to the glory of his younger days, when his one and only short story collection was published (never mind the fact that it was largely ignored). Now, he has found the opportunity of a lifetime. Chosen by the famed opera singer Mercè Casals, also known as "The Wonder Singer" to pen her biography, Mark has spent hours recording Mercè's stories. But, now she's dead and their mutual agent wants to give Mark a kill fee and hire a famous biographer, instead. Mark is not about to let go of opportunity, so he steals Mercè's documents and runs off with all of the tapes of her ramblings.
With the help of Señora Casals' nurse, Perla, and a cross-dressing Casals fan named Orson, Mark scrambles to finish the book while dodging his agent and the new biographer before the speed-writing hack can beat Mark to the finish line and come away with all the glory, not to mention a juicy contract. But, piecing together a masterpiece from the disparate and disordered anecdotes of an 80-something diva is quite a challenge. Both writers realize that they may require the help of Mercè's long-time husband, Nolan Keefe, to fill in the blanks. Will the old man willingly spill his own side of the story?
Describe a favorite scene. I was particularly fond of any scenes that involved the Señora's reminiscences, especially during her early years. The author did a fantastic job of capturing her voice and describing her history (some of which was based on events his own parents witnessed during the Spanish Civil War).
What did you think about the characters? It didn't take long to throw myself 100% on Mark Lockwood's side of the battle over who should have the Señora's tapes and write her story, partly because Lockwood seemed like a decent, average guy who deserved a break and partly because the other writer was a slimeball. I did wish Lockwood would get over his infatuation with Perla. Although his wife was never in the picture enough for readers to get to know her, there was a sense that Claire was a sturdy, reliable woman who wasn't going to put up with any nonsense. Perla was blunt and funny. The Señora was fascinating. Orson was suitably odd. Basically, I'd say I ended up liking the characters I was supposed to like and disliking those who needed work.
What did you like most about the book? I loved the writing. George Rabasa's writing is just a touch unusual, lovely and unique, the book gently paced. While I was reading the book, I had trouble setting it aside and used the word "mesmerizing" when I twittered. I usually twittered when I had to stop to eat, which I thought really interfered with my reading time.

Was there anything you didn't like about the book?

There were a lot of things I disliked about the book, but they were all minor. Of course, I always hate sex talk. I don't care about anyone's sex life, real or imagined, and I'd just as soon skip those parts, although Nolan Keefe's naughty behavior had an obvious impact on his famous wife. I wished Mark would stop making a fool of himself over Perla, although I liked how that turned out. And, I thought the book lost a little steam, toward the end. I'd hoped that there would be some startling revelation about Mercè Casals and there was never any surprise twist -- it's just not that kind of book. After closing my copy of The Wonder Singer, I thought that might not be such a bad thing. The story seemed to end as it should. As I said, though, none of the minor annoyances were enough to stop the book from being nearly impossible to put down.

Absolutely. I'd especially recommend the book to those who love a book that is a little different, very quotable, intelligently and superbly written, and quietly (but not ever in a way I'd classify as "dull") paced. This would be a great book for the literature snobs. You know who you are. I recommend it to the rest of us, as well. Just don't go into it expecting a thriller. It's a relaxed book. There's some excitement as Mark dodges the agent and biographer, but never anything alarming.

Cover thoughts: I'm kind of disappointed that they didn't stick with the hardback cover, which I love. But, I will say that the image above definitely fits the storyline. There is a bit about peacocks, which the cover artist latched onto in both cases. The copy I received is a hardback and bears the cover at left.
Up next: Oh, dear. Honestly, I just can't get my head screwed on, so far this week (although, of course, it's only Tuesday, which everyone knows is just Monday-and-a-half).
I'm reading three books, now:
No Touch Monkey by Ayun Halliday - A truly hilarious, horrifying, wild, irreverant book about Ayun's low-budget world travels, focusing especially on dirt-encrusted adventures that sound absolutely miserable but are really, really fun to read about.
A Girl's Guide to Modern European Philosophy by Charlotte Grieg - A book I acquired based on the first page (so sue me . . . I liked the writing) and which is, so far, fulfilling my expectations. In other words, I've enjoyed the first few chapters and have high hopes for the remainder. It's set in England, which usually is a huge thumbs up for me, since I'm a hopeless Anglophile.
The Last Prince of the Mexican Empire by C. M. Mayo - Historical fiction about a half-American prince whose reign in Mexico was brief but eventful. Or, so I gather. I haven't gotten that far; we're just getting to know his mother, Alice Green.
Since my Costa Rican Spitting Hummingbird seems to have been a hit at Animus3 (meaning I got a decent number of comments), I've decided I'll share him with my bookish buddies. That's you! Hi, bookish buddies! Ever seen a hummingbird spit? 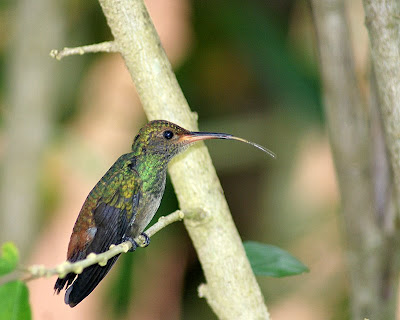 Now you have. Add that to your list of the exciting things you've viewed, thanks to Bookfool.

Off to make the bed (and, perhaps, climb in it to read),

Bookfool, photographer of spitting birds and avid reader, still hesitant about those electronic reader doohickeys but certainly willing to accept one as a gift, if anyone ever gets a generous urge