Blogger burns out on everything but Mt. Dew and Star Trek, goes down in ball of flaming rubble 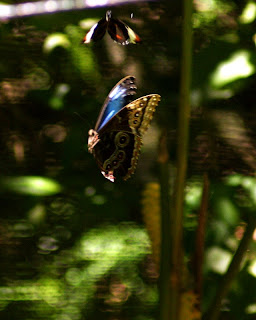 Not really (okay, close -- I still love Mt. Dew and we enjoyed the Star Trek movie . . . just no flaming rubble), but I don't much feel like doing what I intended to do, today, which was write that "April Reads in Review" post that was on the weekend agenda. I wrote my list, but then I just stared at it and realized I'm far too tired to even come up with 25-word blurbs for books I read last month. Maybe later; it's been a really exhausting week.

The butterflies, at right, are from the Monteverde Butterfly Garden in Costa Rica. I have absolutely no reason for posting that photo apart from whimsy. It's not good enough for my Animus3 blog (where I frequently post bad photos, but I think people have had their fill of Bookfool's Bad Shots, lately). I kind of like the Dratted Blue Morpho in flight, even if he is fuzzy, so there you go. He's "dratted" because he refused to sit still and pose nicely, with those beautiful blue wings open.

I've finished two books in the past two days:

A Girl's Guide to Modern European Philosophy by Charlotte Greig really sucked me in. It's the tale of a university student living in Brighton, England in the 1970s and studying philosophy. Susannah is living with her boyfriend Jason in his apartment. Jason is 10 years her senior, deals in antiques and is stable, but they're not as close as she'd like. When Susannah falls for a classmate, she's confused about what to do. Jason is secure; Rob is still just a boy, by comparison. When Susannah becomes pregnant and has no way of knowing who fathered the baby, her dilemma becomes even more pressing. Should she leave Jason? Tell them both the truth? Quit school and keep the baby? Tell Jason and hope he'll marry her? Abort and tell no one? In order to make her decision, she turns to the modern philosophers and tries to apply their logic to her situation.

There were a few little things about A Girl's Guide to Modern European Philosophy that annoyed me (like the way Susannah always tilts her head forward and hides behind her hair, criticizes Christians and, of course, all that sex), but I really liked the story, the setting, the dilemma, and the way Susannah's screwed-up life slowly comes into focus. I breezed through the novel quickly and found it satisfying.

I thought it was pretty funny that Susannah looked at one girl and thought she couldn't possibly be a Christian because she was too pretty. How ridiculous is that? But, I think that comment was simply an example of how Susannah's reasoning was clouded by her own personal demons. In general, the book is hard to define. Chick lit? Not quite cheery enough, I'd say. Romance? Not really. Literature? Kind of, in that it's all about screwed-up people and is kind of gently paced and a wee bit depressing, nicely written but not brilliant. Oh, well, whatever. I enjoyed it, but I do feel like I could use a sweetness and light break.

Major Spoiler Warning!!! I'm going to say what I think and give away some of the story, so skip this little bit if you plan to read On the Run and want to be surprised.

On the Run by Bill Myers with James Riordan is an adventurous excuse to suck middle readers into a series and, in general, kind of irked me. Elijah has a special gift for healing that has kept his family on the run. When he's caught healing a dog that has been hit by a car, on film, the standard bad guys are clued in to Elijah's whereabouts. His parents quickly pack and run with a trio of bumbling pursuers with guns hot on their heels while Elijah, his brother Zach and sister Piper try to protect their little brother when the same bumblers aim their sights on the youngsters.

Helped by a boy Piper has a crush on and his genius buddy, the kids are chased and caught, escape and are chased, etc. The book is full of bang-you-on-the-head symbolism and cliché characterization. The nasty leader of the bad-guy organization is obviously symbolic of the devil and an angel in the form of an older man occasionally steps in to extract the children when things look truly hopeless. Enough information is withheld to keep the reader dangling and the story is a cliffhanger with no definitive ending. A single 250-300 page book might have worked. But, at 103 pages, On the Run simply comes off as an excuse to get folks to buy 4 books rather than 1. It's a tour book and I'll post an sneak peek chapter on Friday, so you can judge for yourself.

Excitement of the week:

Love Begins in Winter by Simon Van Booy (short stories) was released by Harper Perennial, yesterday! I adored the first book I read by Simon, The Secret Lives of People in Love, and this new release is every bit as exciting. I'm going to reread Love Begins in Winter and hope to post my review within the next few days. It's loaded with beautiful little gems and is eminently quotable. Of all the books I've been looking forward to reading in 2009, Love Begins in Winter was #1 on my list and it did not disappoint.

However, I'm currently totally unable to read. Everything I've picked up has just blurred and I've drifted off, which I'm blaming on fatigue. We've had some late nights, this week. Plus, I managed to finish 8 books in 12 days and I'm not a fast reader, so I do think I'm vaguely burned out. Naturally, this also means my reader is starting to sag heavily with unread posts. On that note, I'm off to attempt to get a good night's sleep. Happy reading to all!