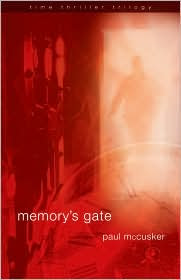 Elizabeth once traveled through time, by accident, and it wasn't a good experience. Now, after becoming a volunteer at the Fawlt Line Retirement Center she quickly has second thoughts. Something strange is going on at the retirement center. First, there's the creepy man in the wheelchair who looks vaguely familiar to her and calls her by a name he shouldn't know. Then, there are the old folks who are disappearing. Has another time fault opened, or is something more sinister going on?

Memory's Gate is the third in a series by Paul McCusker. I missed the first novel, Ripple Effect, but my son and I gobbled up the second, Out of Time, and it stood alone just fine. Ripple Effect is on my wish list, at my son's request. This time, there were occasions I wished I'd read Ripple Effect so that I could understand Elizabeth's past experience better, but I thought the author said enough that, again, there was never any point that I felt lost. And, just as in the reading of Out of Time, I could barely stand to put the book down. It's a fast and furious read with a hint of mystery and plenty of action.

I'm really enjoying this series. Since it's called the "Time Thriller Trilogy," one can assume Memory's Gate is the last of the series. Maybe McCusker will come up with a second round. One can only hope.

As a side note, this is a Christian series and I didn't find it preachy, but the element is there and you can't miss it. When Elizabeth is in trouble, she prays for help. I don't recall much else, but there may be some conversations about Christianity. It's mostly the story itself that stuck with me. It's fun, a quick read, adventurous . . . a nice afternoon escape.