The House in Grosvenor Square by Linore Rose Burkard (review) 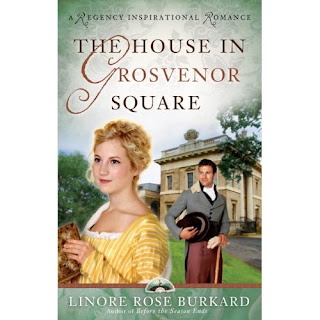 She felt as tragic as Cordelia, the good but misunderstood daughter of King Lear. No, she was Ophelia, singing sadly and strewing flower petals as she glided down a stream, not knowing her very death was around the next bend. Better yet, she was Desdemona, the wife of Othello, whose own husband was going to kill her under false suspicion of wrongdoing. Perchance she was Jepthah's daughter, a virgin dying before her time due to an ill-spoken oath. Oh, the slings and arrows of outrageous--

She was pulled abruptly from her tragic deaths.

The House in Grosvenor Square

is the second in a series. I haven't yet read the first, but I liked Grosvenor Square so much that I've added Before the Season Ends to my wish list. Fortunately, The House in Grosvenor Square stands alone just fine. Ariana Forsythe is engaged to Phillip Mornay and they soon will wed. Ariana is just a tiny bit worried about the fact that she will be the wife of a wealthy man. She feels that she must do her best to aid those who are suffering, especially the orphaned children. When the local charities find out about Ariana's generosity, Phillip Mornay is besieged with requests for money -- each of them arriving with postage due.

Meanwhile, two well-bred villains who have brought on their own hardship have decided that kidnapping Ariana may well be the answer to their problems as well as a means to revenge for a past interference in their lives by Phillip Mornay. Certainly, Mornay will pay handsomely for the safe return of his bride-to-be. When Ariana is barely saved from an abduction attempt and strange events continue to occur, Mornay decides that he must protect his future bride, even if society will be shocked to find that he's keeping her under his own roof. Will the villains succeed in snatching Ariana right from under Mornay's nose?

This is such a delightful book. Ariana is an angelic, pious little thing and she does make the occasional remark about putting faith in the Lord, but otherwise she's just an all-around nice character, often funny and definitely very likable. I gather from the storyline that her intended, Phillip Mornay, was a confirmed bachelor whom she swayed in the first book. He was not religious but became a Christian in order to win her heart. Now, as they prepare for their wedding, he seems a bit distant and the reason for that is kind of humorous. I liked Mornay as much as I liked Ariana. They seemed like a lovely couple, very nicely 3-dimensional and easy to visualize.

Because the book is set during the Regency time period, there is some of the usual Regency lingo. The author has very kindly provided a glossary in the back of the book. I really appreciated that glossary because I don't know my "Regency speak" all that well, although I seem to be improving. We watched Master and Commander, this weekend, and I recognized and was able to identify quite a few words that I wouldn't have otherwise been able to define, so the movie made just a bit more sense than it has during past viewings, thanks to that glossary.

My only complaint about the book is that I think it was a bit too long. There's some repetition (in particular, of certain events that keep occuring but are not fully resolved till the end) and knowing how the publishing industry works, I'm guessing that the author had a word-count target that she had to reach, necessitating a bit of filler. The villains also were not truly all that villainous. Maybe they were toned down a bit due to the inspirational classification, but even during the worst of situations for Ariana, I figured she was going to be just fine. A little more tension would have been nice. On the other hand, as Holly mentioned, bumbling villains helped keep the story light.

Otherwise, The House in Grosvenor Square is quite simply a breath of fresh air. The time and place are well-described. The characters are believable. The hero and heroine are charming but imperfect in their own ways. I will definitely watch for more books by Linore Rose Burkard. First, I've got to get my hands on a copy of Before the Season Ends, then cross my fingers that she's a fast writer.

I finished Grosvenor Square on Saturday but didn't feel like typing, this weekend, so I took most of the weekend off from the computer. The sneak peek chapter is in the post below. Confession: I did a little twittering, but that's about it. On Saturday morning, our marathon group did our group walk/run and it was a long one. We're just a month away from our half-marathon. Since I had a stomach virus, last week, we skipped the final loop because I didn't want to take a chance of getting dehydrated (been there; it sucks). And, then I ended up sleeping away most of the afternoon. Sunday, we had noisy storms and watched Serenity, which always makes me whiny because I love those characters and the setting so much. They left the concept open-ended and I can't imagine why the Firefly series has not been brought back. Talk about scary bad guys -- those Reavers are the most terrifying villains, ever.

After Serenity ended, I finished reading The Wonder Singer by George Rabasa, so I have a bit of sidebar-updating and decision-making to do. What should I read next? Decisions, decisions.

The camera and I have not been out much, thanks to the humidity, but this guy was just begging to be photographed, so I obliged: 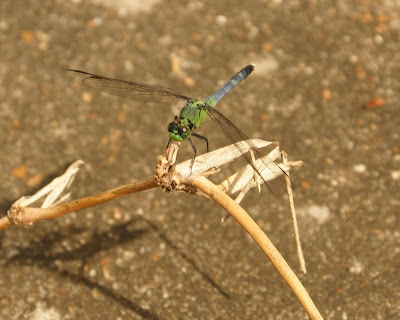 I got three mosquito bites for my efforts. He's kinda cute all dressed up in blue and green, don't you think? One of my favorite color combinations just happens to be blue and green.

Hope everyone had a fabulous weekend!

Itchy but Happy Bookfool
Posted by Bookfool at 1:21 PM