Crossing Myself by Greg Garrett 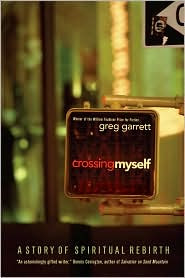 I read a blurb about No Idea by Greg Garrett via B & B Media and it sounded fantastic, but I got the impression that I needed to read Greg Garrett's first memoir, Crossing Myself: A Story of Spiritual Rebirth, first. So, I requested a review copy of No Idea and then ordered a copy of Crossing Myself, which arrived within days (sometimes I just want to smooch Paperback Swap).

Crossing Myself is a rather gut-wrenching read, in many ways, as it's the story of how Greg Garrett went from standing at the side of a busy road, preparing to step in front of a truck (because he felt he would be better off dead than living with chronic depression) to suddenly realizing there is a higher power and a reason to live. From there, he describes his journey.

Born into a Southern Baptist family, Greg Garrett found the religion of his youth was an angry, hell-fire and brimstone religion. He never was taught or believed in a loving God. This early experience drove Garrett away from church and into a life of atheism. For many years, he scoffed at religious people and was utterly convinced there was no God.

In his work life, Garrett thrived. He became a professor at Baylor University, was published numerous times, led writing retreats and traveled extensively to write, reflect, teach and explore. He was a "high functioning" depressive. His personal life, however, was a disaster. At his low point, he was on his third marriage when he considered suicide. He eventually divorced a third time and had to move into monk-like quarters in order to pay child support for his two sons by two different exes.

But, Greg had found something when he stood on that curb, considering the end of his life. A moment of revelation led him to take tentative steps into an Episcopal church, where he found himself slowly realizing he did, in fact, believe in a higher power. He took steps to deal with his depression (medication, therapy). Eventually, he was startled to find himself called to be a priest. At the end of Crossing Myself, Garrrett was balancing study at seminary with teaching at Baylor, writing, and leading workshops. He was a busy man and a happy one.

There's a little about writing and how he discovered he is a Christian writer, like it or not, and wrote with a certain spirituality in his stories, even during his time as "cultural Christian", one who was raised a Christian but not practicing and not actually even believing. There's so much more to this book than I can really describe in a brief review, but I think it's important to mention that Garrett is very opinionated but extremely down-to-earth. He has a tendency to beat up on himself for mistakes and he struggles with certain Biblical concepts, as we all do, and how they apply to real life. I'll close with a couple of quotes.

I wrestled a long time with this idea, with life and death, with all this heaven stuff.

Because frankly, I don't think the carrot and stick of the afterlife should have an effect on the faith we choose, or on our moral behavior in this life. When I became a Christian as a young person, it was because my pastor in Oklahoma had scared me witless about dying in my sin and going to hell. I became a Christian not because I really understood the gospel message or particularly wanted to be a good person. I just didn't want to go to hell and burn forever.


On writing as a Christian:

Let me establish at the outset that I don't resist the label of Christian writer because I feel threatened in terms of my career or the acceptance of the reading public, for certainly that would be a reason, at least. But it's not a reason: More than any time in my life, there is a spiritual hunger everywhere I look, a hunger for connection, for some sort of ultimate meaning. Finally, our society seems to have grasped what Dr. King often said in sermons forty years ago: "The great problem facing modern man is that the means by which we live have outdistanced the spiritual ends for which we live."

On being called to love:

If you think that gay people don't go to heaven -- you understand, by the way, that you're not the one in charge of that -- that's fine.

You still have to love them.

If you think the church down the block -- or across the ocean -- has got it all wrong, it doesn't mean the Devil has led them astray. And you know what?

You still have to love them.

If you think that somebody is a bigot , or a hypocrite, or a closed-minded fundamentalist, that's your opinion.

But you still have to love them.

I can't even begin to tell you how much I loved this book. It was an emotional read. My life is not a ragged mess of broken families, but I've wrestled with how the church reacts to the outside world, how easy it is for believers to become a cliquish, insular group that doesn't react to societal change or reality in a loving, embracing way. And, I've been in that dark hole of depression a bit too often. It's hard reading about Garrett's pain but lovely reading about how he transitioned from deep pain to daily joy.

Next up will be my review of No Idea by the same author. Be patient with me. I'm a tired puppy, taking muscle relaxants for back pain and trying to write my Nano book (no, I haven't given up!).Happy Trails!

Bookfool
Posted by Bookfool at 9:02 AM