Cross My Heart and Hope to Spy by Ally Carter 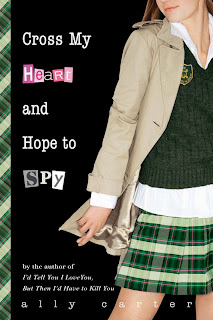 I bought Cross My Heart and Hope to Spy on impulse at Borders, last week, and whipped through it almost immediately. It's the second in the "Gallagher Girls" series, which are set at Gallagher Academy, a spy school for girls. The heroine is a student at Gallagher and the daughter of the headmistress.

The first book in the series is entitled I'd Tell You I Love You But Then I'd Have to Kill You. I haven't read that introductory novel but references to the first novel filled in the background sufficiently; there was never a sense that I was lost or missing something. Cross My Heart and Hope to Spy stands well on its own.

In Cross My Heart and Hope to Spy, heroine Cameron (Cammie) Morgan begins her sophomore year with a visit to Washington, D.C., where she's interrogated about her relationship with Josh, a former boyfriend who is not a spy (bad idea) and with whom she has been forced to break up. Obviously, her relationship with Josh was the focus of the first book, which Bookfool is now very, very anxious to read. Cammie still misses Josh but promises not to cause any more trouble. In addition to getting in trouble for her relationship with Josh, Cammie's known for having explored every crevice of Gallagher Mansion and one can presume that's gotten her into a bit of hot water in the past.

At school, Cammie and her friends arrive to find a section of the Academy blocked off, making it slightly difficult and time-consuming to navigate the Gallagher Hall (an old stone mansion). Cammie has made a commitment to behave, of course, but the realization that the staff's explanation for the closing of that portion of the school can't possibly be true and an overheard conversation between her mother and a favorite teacher have Cammie burning with curiosity. Cammie and friends decide there's no harm in a little investigation -- that's what they're training for, after all. When a group of students from a spy school for boys show up, the girls are perplexed. What is their purpose? Are they really from a similar school or is there more to those boys than meets the eye?

All becomes apparent in an exciting conclusion that I can't tell you about because it would be a big, bad spoiler. But, let me tell you this . . . I found the final scenes so exciting, adventurous and surprising that I can't part with the book. I'm going to have to reread. There is nothing I love more than fast-moving intrigue.

Another 5/5 - Entertaining, lively, intelligent and humorous. I love Ally Carter's writing. I do advise reading the books in order, as Cammie reflects on an important plot point in Book #1. I'll still read it, but I think it would be much more fun and surprising not knowing what Josh did that exposed their relationship and led to their break-up.

Bonus: Ally Carter has a degree from my alma mater, Oklahoma State University. Wahoo for Ally and Go Cowboys!