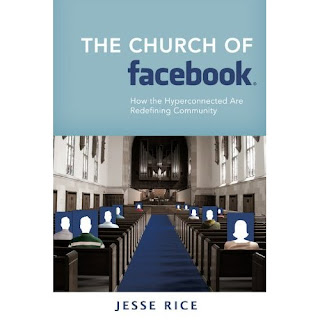 The Church of Facebook: How the Hyperconnected are Redefining Community by Jesse Rice
Copyright 2009
David C. Cook - Nonfiction/Psychology/Religion
231 pages, including references

I don't know if I can do justice to this book, which I loved so much I plan to reread it and share with my husband, but I'll do my darndest.

"The world is shrinking, one profile at a time," it says in bold lettering on the back of The Church of Facebook. Don't worry, though. Like $20 Per Gallon (so nice of me to provide a link to keep you from paging down a whopping 6 inches, isn't it?), The Church of Facebook isn't depressing. It's a little scary, however, the way Rice describes our shift in social lives, how our worlds have been, yes, shrinking down to little social communities on the Internet.

opens with the story of the opening of the Millenium Bridge in London, England -- by all accounts a disaster of engineering that, fortunately, did no harm to those who walked across it on opening day. The author talks about how the people walking across the wobbling bridge altered their steps into a synchronized rhythm and then describes how this story fits into the physics concept of spontaneous order, which oddly can be applied to psychology, as well.

I don't know that I can explain the concept, unfortunately, but the story of how we fall into sync with each other is one heck of a grabber opening. I had to restrain myself to keep from reading because I'm in a discussion group (the quietest discussion group on the planet - only two of us have said a thing) and wanted to hold back. Eventually, I figured nobody was talking, might as well read on.

The first chapter of The Church of Facebook describes our need for connection with other humans and the second describes why we have need to feel a sense of control over our own lives. Facebook and other social networking sites, he says, are not enough. The author describes the history of Facebook, how it and other such networks have changed the way we interact with each other, why we need connection with real-life people and a bit of debate about whether or not such social networks can be a substitute for in-person relationships. He doesn't downplay the usefulness of internet connections; he simply clarifies how they've caused us to become more isolated and indicates that social networking should supplement our interaction with other people, not supplant it.

The author concludes by doling out some advice on how to use Facebook in a positive way, "mindfully" rather than just in "look at me" sound bites.

The word "church" in the title gives you an idea that The Church of Facebook is a book that dips into religion. Yes, there's a bit of a religious aspect and it's Christian. But, Jesse Rice is both a psychologist and a minister and the book veers heavily toward psychology. In order to get his points across, Rice drags you around the world to show specific examples. He is apparently a natural raconteur. I was absolutely engrossed and, in particular, enamored with his sense of humor.

- While the church aspect lost me a bit, for a while, I thought this book was just fabulous - beautifully written, fascinating, revealing, thought-provoking, entertaining. Do yourself a favor -- don't skip this book because of the word "Christian". I'd hate for you to miss out.

In case you found yourself blinking repeatedly, wondering whether a massive number of book reviews (sans chatter) showed up on my blog overnight, you're right. I was going to skip right on over the reason, which I mentioned in the first of the five reviews. But, nah. I'll just tell you. I couldn't sleep because the neighbor's driveway spotlight shines directly through our blinds and into the master bedroom. Nine times out of ten, the neighbors remember to turn that darned light off, but on the rare occasions that they don't . . . no sleep. None. I gave up at around 2:15 and I've been hammering out quickie reviews, ever since. I cannot see straight, but at least I was productive, right?

Many thanks to Audra of B & B Media for the review copy of this book.