A Climate for Change by K. Hayhoe and A. Farley (review) 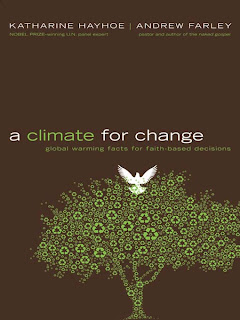 What do you mean you're not interested in global warming? If you're about to skip this review because global warming is a blow-off topic, an "I'm not really interested" thing, or you think Al Gore's trumpeting is a crock, then you're missing the point that changing climate (not weather -- climate . . . the authors explain the difference) affects all of us.

First things first. I loved A Climate for Change because it answered absolutely every question I had about global warming but the authors never resorted to politics, instead simply stating the facts. It's written from a Christian perspective, drawing on scripture and describing humans as the "stewards" of Earth, but I think anyone who either questions global warming or believes in it and just doesn't feel like they know enough about it to speak intelligently and answer questions would enjoy this book.

I fell into the latter camp and enjoyed A Climate for Change so much that it's going on my keeper shelf.

The most important thing I learned was the meaning of climate change versus weather change. It sounds intuitive, but we've all expressed dismay at how on earth one of our friends can be quoting record cold temperatures proving that her area is experiencing the coldest winter in decades when the entire planet is supposed to be warming up. Isn't that a contradiction? Nope, it's not. And, I can't possibly explain as well as the authors of A Climate for Change, but it boils down to this . . . weather changes day-to-day and it's chaotic. Climate changes over long time periods.

You can have a cold winter or a temperature-breaking week in either direction without it having anything at all to do with climate. Climate change generally happens over thousands of years. The fact that climate change over the entire planet has happened in a matter of a mere 200 years (since the Industrial Revolution) is not normal. And, it's happening faster than even scientists with predictive models anticipated -- enough so that your 15-year-old gardening guide may be out-of-date because the planting zones have changed.

And, how does climate change have anything to do with us? I think I'll refer you to the book for the answer to that question, but it's surprising. In the U.S., we have a tendency to feel uniquely protected or immune from happenings in the world at large and it's true that the poorer nations will suffer even more from changes in climate, but climate change does and will have an impact on everyone. It's worth reading the book to find out how global warming could touch your life.

Even the last holdout, the American Association of Petroleum Geologists, released a statement in 2008 acknowledging the effect humans are having on their environment.

Today, there is no legitimate national or international scientific organization that does not accept the fundamental role of humans as drivers of recent climate change.

These estimates are actually nothing new. Back in the 1960s, one of the earliest climate modelers in the Soviet Union, Mikhail Budyko, concluded that if the planet were to warm by several degrees, Canada and the Soviet Union would benefit. That's because much more of their land area would become useful. In the spirit of the Cold War that prevailed during those times, Budyko recommended to the Soviet government that they burn every piece of coal they could lay their hands on. His purpose? To deliberately enhance global warming so that the rest of the world, including the United States, would suffer and the Soviet Union would benefit.

Fortunately, no one took the idea seriously enough to actually carry it through. But today, we are nonetheless well on our way down Budyko's suggested pathway. And, at least in the area of agriculture, the results are much as he predicted.

Rising temperatures threaten the poor, the disadvantaged, the elderly, and our children--those whose health is most affected by extreme heat events. In 2000, the World Health Organization estimated that there had been, in that year alone, 150,000 deaths due to climate change. The estimate includes deaths as a result of extreme weather conditions that are occurring with increased frequency, changes in temperature and rainfall conditions that influence the transmission patterns for many diseases, and patterns of food production and supply.

5+++/5 - This is the kind of book I wish everyone would read and talk about. It's well-written, thorough, clear and succinct. Charts, graphs and photos add plenty of visuals. Additional reading suggestions and tons of scientific sources will give anyone who still isn't convinced plenty of material to make an informed decision. My only complaint--and obviously, it didn't bother me enough to take off a point--is that the conclusion sounds a little heavily Christian and preachy. So, some may not like those final few pages. I didn't find the rest of the book heavy-handed; it's worth reading, even if you feel like you have to skim the Christian portions.

Don't forget! I'm giving away 5 copies of A Climate for Change. Note: The giveaway has ended. This is a breezy book, not at all boring and heavy like a lot of non-fiction and hugely, highly recommended. You should definitely try to win a copy.

I'm off to run errands and then I've decided to continue with the Nano. Eeks. Wish me luck.
Posted by Bookfool at 9:28 AM