No Idea by Greg Garrett 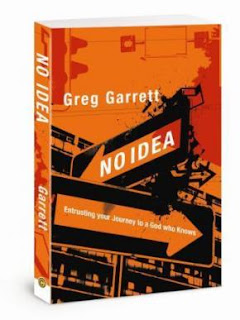 I read Greg Garrett's first memoir, Crossing Myself, because the promotional material for No Idea sounded fantastic but one book precedes the other and I wanted to understand where Garrett was coming from. Here's how he describes the two:

In my first spiritual autobiography,

Crossing Myself, I wrote about my lifelong battle with life-threatening depression, how it almost got me, but how through faith and community, I came to a place where I decided I would go on living.
In this book . . . my editor wants me to write about what comes next.
Once you've decided that you're going to live--no mean feat for some of us--how do you figure out what you're supposed to do with that life?

I'm not sure this book actually helped me to discern any sense of direction for myself, but I enjoyed reading the second part of the author's journey. In the first book, Garrett came to the decision that he was being called to be a priest. Several years have passed; he's completed his studies at seminary (while teaching at Baylor) and, in spite of his conviction that he's received a calling, he has not been ordained -- he's done all the requirements for ordination, but he hasn't been through the laying on of hands that gives one the title "priest" or "minister". He can minister in every way except the giving of the sacraments.

But I have come to believe that, as God sees the world, there are no mistakes; everything that happens is a part of a larger plan.

That particular comment has to do with the fact that Garrett's three divorces have kept him from the final step to official priesthood, although he's able to minister. There were two parts of No Idea that I found particularly moving. In one section, Garrett describes his time working as a hospital chaplain. Part of his job as a hospital chaplain involved being with families as a loved one is dying and then praying with and comforting them after the death. Often, he was called to the hospital because the nurses knew someone wasn't going to make it, but it was not his place share that the doctors were expecting imminent death. Instead, he was called in to be present and pray with families after their loss.

I guess this part really moved me because I've been on the grieving end a few too many times, already. Garrett had not, at this point, ever experienced the loss of someone close, but he appeared to do his best to be sensitive and caring. I spent this entire chapter mopping up tears and found myself wishing I could tell him how much a chaplain's presence meant to me when my family and I had nothing else to do but hope and pray for a quick end to suffering. Every little word of encouragement and every offer to pray makes a difference.

I also found Garrett's anecdotes about a homeless person who occasionally dropped by for a handout very touching. But, what I love most about Greg Garrett's writing is his unflinching honestly about the Bible, religion, and the people of the church.

I've resisted letting the Scripture speak to me as insight into God on a regular basis. And I'll confess that I've done this mostly because I haven't liked the way Scripture has been used on and around me in my life, the way others have read it in bits and pieces that corresponded to their worldviews, the way they have read those particular bits literally and focused on the things with which they agreed and ignored the things they didn't.

How can people of faith make the Bible an important part of their lives despite all the ways it's been read and misread, used and misused over the centuries?

We have to start with an understanding that what the Bible has to say is not just what its primary advocates in our culture think it has to say. And reading it in a way that pulls those other things--peace, justice, love, forgiveness, reconciliation, radical faith, daily practice--back to the forefront.

That's the kind of comment Garrett frequently makes in both books. He talks about his frustrations with the church but, at the same time, you understand that the lack of perfection of the church is no longer enough to drive him away. It did so, at one point, and he returned. I think a lot of us can relate to those frustrations; in fact, it seems like the flaws of church bodies, the interpretation and misinterpretation of scripture, and other discomforts with the church are popping up in spiritual nonfiction quite a bit, these days. A lot of us are believers, but can't seem to find our place in the believing world, in other words.

I love Greg Garrett's writing. The subtitle sounds a little like it's a "how-to" and I don't think you can look at it that way; it's more of an autobiographical account of how one man has taken his faith and put it to work. I truly enjoy reading about his experiences, frustrations, and his thoughts on Christianity. Both books are fascinating, moving reads that I highly recommend. I do advise reading them in order and I'm glad I managed to get my hands on a copy of his first book.

Many thanks to Audra of B & B Media for my copy of No Idea.

Stuck at 13,297 words. I don't like my story at all. While I do think the idea is great and has a lot of potential, it's just not the kind of book that lends itself to being pounded out quickly, in my humble opinion. So, I'm meditating on whether to continue or to go ahead and switch stories at Day 9. Rough decision. I'm going to sleep on it. Feel free to pummel me with opinions.

I hastily read Found by Margaret Peterson Haddix on Friday and enjoyed it till the end, at which point I thought her explanation for the mystery was a little wanting. However, it's the first in a series and I'd like to continue on to the next book. So, I was rather horrified to find that the second book, Sent, will not be released in paperback until August of 2010. Argh! I don't want to mix hardbacks and paperbacks, so I'll wait.

Also just finished: $20 Per Gallon by Christopher Steiner. Having finished the review of No Idea, that means I'm still 5 reviews behind. The other 4 finished books: Found by Haddix, A Climate for Change by Hayhoe and Farley (I'll post a sneak peek chapter, tomorrow, just because I loved it so much), The Bible Salesman by Clyde Edgerton, and Pretties by Scott Westerfeld.

To be honest, I'd rather bury myself in books than write. Go ahead. Chew me out. I'm used to it. :)