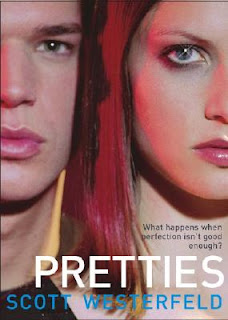 I read and reviewed Uglies (<---link to my review), the first in Scott Westerfeld's dystopian series about a world where people are divided by looks, and enjoyed it so much that I rushed out to buy the second and third in the series. Pretties is the second.

It's not giving anything away to say that in Pretties, Tally (the heroine of Uglies) has gone through the surgery to make her beautiful and now lives in New Pretty Town. However, there's a little bit of spoilery stuff, here -- which will also spoil Uglies, if you haven't read it, so beware.

Out in the Smoke (the world where the rebellious few who don't want to go through surgery live), Tally found love, betrayed a friend and inadvertantly caused a disaster. During her time in the Smoke, she found out there's more to the Pretty surgery than meets the eye.

Knowing she was on the verge of being caught by the Specials, a police force of cruel-looking pretties, Tally wrote a note to herself to be delivered after her surgery -- a surgery that would take some of her memory away.

I'm not going to say much more about the plot because I really don't want to spoil the read for anyone, but I will say that I enjoyed Pretties almost (not quite) as much as Uglies. The further I got into it, the more I liked it. Like Uglies, there were times I thought the author did something that I'd have edited out if I had a red pen and the power (mwah-ha). For example, instead of saying something made Tally dizzy, he would say it was "dizzy-making". In the first half of the book, those hyphenated adjectives were way overdone and then he eventually toned it down.

- A solid, enjoyable continuation of a fascinating series. Not quite as thought-provoking and discussion-worthy as the first in the series, but a terrific read and highly recommended.

I hope to read Specials, the third in the series, soon.

This is, I believe, my 5th book for the YA Dystopian Challenge -- obviously a challenge I am diving into with enthusiasm.