How to Roast a Lamb by Michael Psilakis 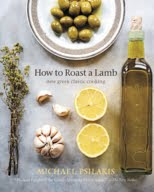 First the review. I'll post our favorite recipe separately. The most important thing you need to know about How to Roast a Lamb is that it's not just about roasting lamb. It's a big, hardback book that combines recipes with the author's personal story about how his Greek/Cretan roots, large family gatherings, love of food and fortuitous entry into the restaurant business became a lifetime pursuit that led to owning a series of restaurants and becoming a chef.

Psilakis' story is fascinating. His parents left Crete after WWII, when conditions were terrible and there were severe food shortages. I've read a couple of books about Crete during WWII, so it was easy for me to visualize post-war conditions. When he left for New York, Michael's father brought along seeds from the family garden, which he used to begin a new garden in the U.S. During Michael's childhood, he was put to work in the family's huge garden, taught how to dry and save seeds from each year's crops and, at times, also helped his mother in the kitchen. His family sounded a lot like the family of My Big Fat Greek Wedding and I have to admit I was a little envious reading about their huge gatherings.

The recipes come from years of creating recipes in his restaurants, often using traditional recipes but with some updating. Psilakis makes an unfortunate assumption that people can acquire the ingredients he uses just about anywhere -- a pretty common assumption made by people who are accustomed to life in a big city. This is unfortunate for us because we have to drive 60 miles just to get some ingredients he considers basic and others would have to be either ordered online or substituted. And, even his substitute ingredients (mentioned in the opening of the book) are impossible, difficult or expensive to acquire. He frequently uses a confit, sauce or viniagrette that must be prepared separately.

So, we were a little limited as to what we could make but there is plenty of variety in How to Roast a Lamb. The author has separated the recipes into sections that indicate what they're all about - "My Father's Garden" has recipes made from ingredients in a backyard garden, for example. There are fish recipes, recipes from Psilakis' first menus, game recipes, spreads and other recipes specifically for celebrations and recipes designed to be cooked for large gatherings. Finally, there is a section on "The Aegean Pantry" in which the author shares recipes for confits, spice mix, several vinaigrettes and candied fruits to keep on hand.

My opinion of the book, in general, is that it's a gorgeous book that I love looking at and reading but which seems pretty impractical for our household. I can't say that would be true everywhere. If you live in or close to a city where you have access to a wide variety of herbs, cheeses, seafood and vegetables, you might really enjoy the book.

My husband's opinion: "Most of the recipes are too complex." I should qualify his statement with the comment that the author is of the opinion that if you're having a large gathering, there's nothing wrong with spending days -- literally, up to a week -- cooking in preparation. I think that's lovely if you can do it and if you have good reason, but we have almost no family at all and zippo "gatherings" or parties, at this point in time. And, in spite of his comment, we've found a few recipes we like. I'll share our favorite in my next post.

3.5/5 - Gorgeous book, great personal story packed with personal photos and beautiful photos of each of the recipes but impractical and a bit complex for the ordinary cook. Particularly recommended for those who enjoy cooking complicated menus for large parties and have easy access to a variety of fresh ingredients, including seafood and herbs.
Posted by Bookfool at 12:21 PM