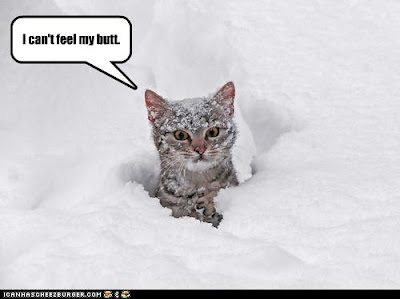 I'm sitting in my office, which looks a little more like the inside of a tornado than an office but we won't go there, yet. There's a squirrel climbing down the oak tree outside my window and another one sneaking up behind him. The cat's asleep. My bee sting of two days ago itches. And, I don't feel like writing. At least, not yet. So, you get an update on reading and writing (and possibly arithmetic).

I'm totally spazzed, today, because I lost my mind and decided to move the futon from our office to the den -- mostly to keep my husband from buying a new sofa. I want to use the available space to shift things around before filling up that room (which you may recall has been recently carpeted after two years of being down to concrete) and moving the futon gives us room to paint the office. Yeah! Starting yet another project when we have half a kitchen and 90% of a den. What more could a girl want than to end up with 2/3 of an office? 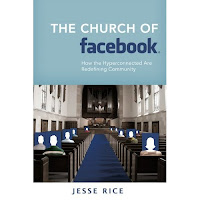 I'm on the verge of finishing The Church of Facebook by Jesse Rice and have both enjoyed and been horrified by the ideas it presents about the concept of "community" and how Facebook and other social media (including blogging) lack important aspects of true community. And, yet, at this point I think he's saying that there's a certain amount of contentment that one gets from blasting info about one's life on Facebook, conversations on Twitter, etc. The "church" aspect is losing me a little. I should maybe not have read bits of this when I was sleepy and might do a little rereading before I review, but in general the book is mostly psychology and quite fascinating.

Yesterday, I listened to and enjoyed BlogTalkRadio's interview with the authors of A Climate for Change and thought it was very well done. I sent in a question for this particular interview, so if you listen in you can hear my question and author Katharine Hayhoe's reply. And, if you can't fathom parting with the money to buy the book, A Climate for Change is currently available in full, online, especially pertinent for those of you aren't North American and therefore can't sign up to win a copy. You can also purchase it as a download for a reader, if you're one of those people who have moved with technology in a way that makes my nose wrinkle. 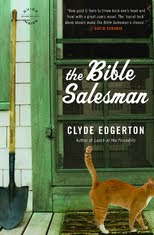 I'm going to just do a quickie review of The Bible Salesman by Clyde Edgerton, right now, this very minute because I felt like the best descriptive term I can come up with is . . . nyeh. Disappointing to have such a pitiful grasp of the English language, but at this very moment you'll recall that I'm spazzed, frazzled and basically wiped out. So, you get what you get.

is about Henry, a fellow who acquires free Bibles, which he sells door-to-door. He meets a thieving, lying, dangerous man named Preston Clearwater, who convinces Henry he works for the FBI and hires Henry to help out with his car-theft ring. Henry likes the money and loves the idea that he's helping the FBI, but he falls in love along the way and the whole FBI thing starts to lose its fizz. Eventually he puts two and two together and comes up with 9, which leads to a pretty exciting and satisfying ending. It's just that . . . maybe it was me, but I kept falling asleep while reading this book. I think I can give it about a 3.5/5.

Nano-wise, the writing on my bad sci-fi has gone well for the first three days -- which, of course, were really days 9-11 of National Novel Writing Month. I skidded to a halt at a total of 9,271 words, last night. Not bad for 3 days' work, but the LOL cat, above, describes my sentiments at the end of the day.

This has really been a tremendously slow reading week, but I've read about 100 pages of The Foundling by Georgette Heyer and find myself besotted with the Duke, who was born a sickly baby and coddled to the point that he's getting tremendously feisty. I love Heyer's feisty characters. 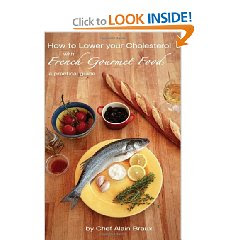 And, my husband has now cooked 4 of the recipes in How to Lower Your Cholesterol with French Gourmet Food by Chef Alain Braux, (<---another Amazon link that doesn't benefit me, just in case you want to dash over to buy a copy). Kiddo gobbled up the pork chops, returning for seconds (moist, amazing, cooked in wine and topped with apples, celery and cheese) and I made my husband go back to the store to get more portobello mushroom caps to make a second round of stuffed mushrooms. Our pumpkin cheesecake is chilling.

The book is about 2/3 health book and it's the most interesting book on lowering cholesterol that I've read -- actually, I don't believe I've ever finished reading any of those I've attempted in the past. It's enjoyable to read at least in part because the author occasionally talks about his childhood in France. Those musings, along with fabulous recipes and very readable nutrition advice have made this book a 5-star for both myself and the husband. I hope to write a full review by this weekend and I'll add a favorite recipe when I do.

I think that's about all the news, for now. How are you doing? Still no blog-hopping for me. I'm feeling a tad lonely, but it's fun writing bad sci-fi. You should try it, sometime. Seriously.

Happy, Happy Thursday (or Friday, for those of you on the other side of the world)!