The Blue Umbrella by Mike Mason 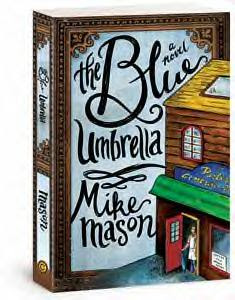 The Blue Umbrella by Mike Mason
Copyright 2009
David C. Cook - Fiction/
425 pages
Includes an interview with the author and a glossary

This will be another quickie review. It's currently 3:48 AM and I can't sleep because the next-door neighbor left her driveway spotlight on and it shines directly through our blinds. Someday, I'll order a blackout curtain.

Zac Sparks is ten years old when his life changes dramatically. After his mother is killed by lightning, he's snatched up by his two evil aunts, Esmeralda and Priscilla Henbother, and taken to their mansion in Five Corners. The two Aunties and their father, who is known as "Dada", can't be pleased. Dada is, in fact, so frightening that every time Zac sees him he faints dead away and has to spend time recovering in bed.

Zac not only is subjected to frequent beatings but also is sent on a mission to steal an umbrella from Sky Porter, a homely man who runs the general store.

Zac grows tired of being beaten with his aunties' cane but he has a great deal of difficulty convincing himself to steal from Sky, the only truly friendly person he's met in a town full of oddballs. Then, Zac finds out the secret of the umbrella and makes an assumption that colors his opinion of Sky. The umbrella has dangerous powers. What will happen when the umbrella falls into Dada's hands? Can Zac and his growing circle of friends retrieve the umbrella before it's too late?

Zac's story is an interesting one, but I must admit I felt I was dragging myself through the book because the beatings were too frequent and upsetting. There are so many people who seem to be just flat evil and the child abuse is hard to take. Zac is even forced to ask for more srikes, each time he receives a slap of the cane on his backside. The ending is a bit happily-ever-after and I liked that, the mystery of the umbrella, and the slow revelation that there were actually quite a few good people in Five Corners. However, they came into the picture a little too late for me to find this book really enjoyable.

- Creative storytelling, unique but disturbing. I don't personally think it's suitable for middle readers -- perhaps teenagers. I love the glossary and think the writing is decent, if not a bit magical. But, it just wasn't the book for me.

The Blue Umbrella's publisher is David C. Cook, a Christian publisher. There are some hints about heaven and the book ends with a scripture but that's about it as far as Christian references, unless I missed something. I found myself thinking the book was a bit harsh for a publisher of Christian books.
Posted by Bookfool at 3:42 AM

Email ThisBlogThis!Share to TwitterShare to FacebookShare to Pinterest
Labels: book reviews, recommended with some reservations