Apologies for the terrible picture. I don't feel like taking another, so it is what it is. I tried to brighten it up a bit. 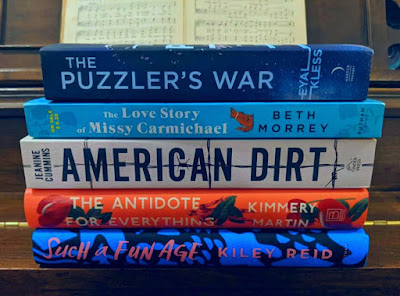 
I mentioned the fact that I pre-ordered American Dirt because of the controversy. It's an uncomfortable irony that the book arrived literally on the day that numerous posts were made about the book's problems and a recommended-instead reading pile image passed around. Will I still read it? I plan to, yes. I already paid for it, after all, but when I get to it I'll watch for the harmful stereotypes described in various articles about the book. And, if I have the time, I'll read the two books that I have from that recommended list, first. I'm not in any hurry to read American Dirt, now. When I bought the book, it sounded like exactly what I was looking for but I would have avoided it if I'd seen what the author had to say.

And, I had one DNF, this week: A Good Neighborhood by Therese Anne Fowler. I got to page 137 (a little more than halfway, I think). I've heard a ton of positive buzz about this book and I know people who have already enjoyed it, so I recommend getting other opinions if you're thinking about reading it. It has a 4.05 rating at Goodreads, so you can see that my opinion differs from the average.

Had I finished A Good Neighborhood, I was leaning toward about a 3. It's not a bad book, in my opinion, and there's a strength to the author's writing. But, I thought the characters felt a bit one-dimensional and unreal. And, I didn't like the point of view. The story is narrated by a generic set of neighbors. "We thought she was kind but a little eccentric," is an example of the writing style. The author will start a chapter that way and then smoothly alter the way the sentences are written, so that it doesn't feel like you're listening to the neighbors, anymore. Then, the next chapter or a section within a chapter will revert to the generic "we", again. At any rate, I didn't like the type of narration at all. But, it was mostly feeling like the characters were too carefully crafted, to the point of almost being caricatures, and the fact that I just wasn't enjoying the read that made me finally decide to abandon it.

I read a little of The World of Sanditon, this week, but not a great deal. I figure it doesn't hurt to stretch this one out and enjoy it while I'm watching the series. It's loaded with beautiful photographs and info about the time period. There are fewer photos from the actual series than from Regency England but they're gorgeous. My only problem with the book, so far, is that the photos are not labeled. I really dislike unlabeled photographs. Tell me what I'm looking at! Even if it's obvious that I'm seeing a cricket scene, I want to know the names of the actors and their roles (left to right, if you please). Otherwise, I am absolutely loving it.

Is anyone else watching Sanditon? I'm curious what others think. I've only seen one comment (and it was by someone I didn't know, on Facebook, so I chose not to respond). The other viewer thought it was a bit "too modern". I've noticed the modern music, of course, but I actually like the shift to males who are enterprising, rather than just gentlemen with huge estates.

I just began reading Dragonshadow yesterday. I abandoned A Good Neighborhood on Saturday night and didn't start anything else that evening, but I knew Dragonshadow would be next. And, I am loving it. I've only read about 40 pages but it's everything I hoped for in a sequel, so far.

Not a big reading week, again. I think I may have to face the fact that this is not going to be a great reading year, at least for a few months. We shall see. I'll keep trying my best. I haven't heard from any of the publicists who contacted me about children's books, in the past, and I desperately miss reading and reviewing children's books, but I'm not planning to reach out to them, at this point. Maybe I'll pull some of the old favorites I kept for when grandchildren visit out and reread them, just for fun.

I did a lot of restless channel-flipping, this week, and the only thing I managed to actually watch was The Royal. Unfortunately, I was in a terribly blue mood on the day I watched two episodes of the program. Two of the characters were cruelly killed off together and they were characters I really liked. Actually, they did great casting on that show so I pretty much like all of the main cast members, although they often brought in one who was awful and then softened. That's when they killed them off or shipped them away, after they'd been suitably tortured. Anyway, wrong day to watch two people get trapped and blown up. So, I haven't talked myself into returning to that.

I decided to move on to comfort programming — movies I've already seen and know I love, or mini series. I started watching Brideshead Revisited (the 80s version with Jeremy Irons and Anthony Andrews, who I heard left acting after marrying an heiress). I'm not sure if I'll continue. I was enjoying it, and it's fun reminiscing because I've been to Oxford, England and seen some of the sites where they filmed. But, the episodes are looooong and I'm fidgety. I also started watching but didn't finish The Great Escape, one of my all-time favorite movies. I will definitely finish that but older movies were longer so I stopped watching that for the exact same reason. I was getting fidgety and wanted to get up. I haven't seen The Great Escape in so many years that I've read the book in between viewings and know that it's quite different. The movie definitely took an interesting story that is fairly dull and technical and made it entertaining.

Hit me up with any and all recommendations for funny TV or movies. I need to keep it upbeat, right now.

©2020 Nancy Horner. All rights reserved. If you are reading this post at a site other than Bookfoolery or its RSS feed, you are reading a stolen feed. Email bookfoolery@gmail.com for written permission to reproduce text or photos.
Posted by Bookfool at 12:27 PM